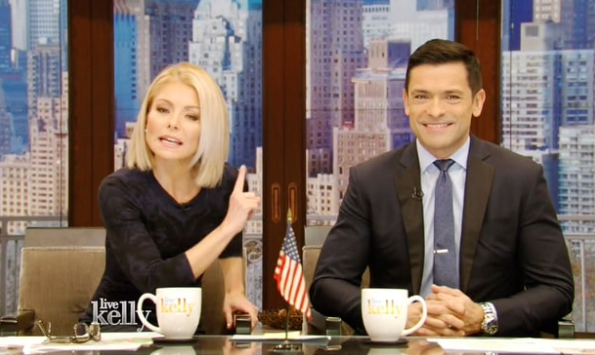 WATCH: Kelly Ripa Puts Her Husband Mark Consuelos On Blast, Find Out What He Does After They Have Sex That Pisses Kelly Off! (VIDEO)

Kelly Ripa and her husband Mark Consuelos have been married for over 20 years. They have three children together and probably know each other better than anyone else.

They’ve also probably had sex a ridiculous amount of times. Mark has been inside Kelly so many times that he probably hangs his coat right inside her vagina walls. By this time, 21 years in, they should know exactly how to please each other.

We’re sure the sex is great for them, but it’s what happens immediately after sex that makes Kelly wonder why she even decided to have sex with him in the first place.

“When there’s special married couple time in our house — do you know what I’m talking about? Because there’s kids watching, so I’m just going to say, let’s call it special grownup time. He’s immediately mean to me afterwards, and I don’t like that!”

That’s right. After Mark unloads his ~Consuelos~ juice, he treats Kelly like an ugly stepsister. Kelly shared this information during Live With Kelly on Wednesday when her husband joined her as a co-host.

He seemed a bit embarrassed by the story, and his faced turned bright red as she continued to talk about it…

“I think it’s bizarre. He becomes short with me. You know what I mean? Like irritated. And I’m like, ‘Oh, now you’re irritated? You were so loving three minutes ago!’”

Damn. She put his ass on blast. Dude better make her some waffles or something after their next sex session. Or hit it so good that she fall asleep.