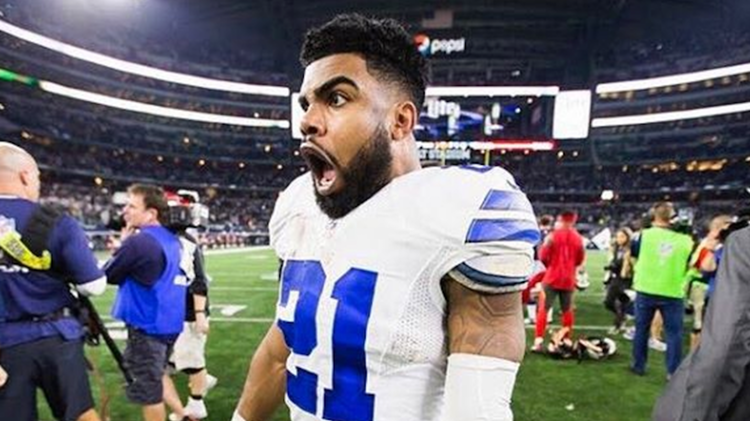 Ezekiel Elliot Faces Possible Suspicion from the NFL After Two Videos Reveal Inappropriate behavior at St Paddy Day Parade. We have the VIDEOS!! In Elliot’s short time in the spotlight he has managed to get himself in trouble again. Let’s not forget, he is still being investigated for domestic violence claims against him, so you would think he would try extra hard to stay out of trouble.

TMZ caught the 6 ft 225 lb running back, turnt up at a St. Patrick’s Day parade.  Well as part of his turn up, he decided to pull down.  Pull down a woman’s top!  Yep.

A representative for Elliot was quick to say that the woman wasn’t upset and that she would not press charges.  According to TMZ, “it was all in good fun”.

Regardless, if you remember what happened with Ben Roethlisberger, it didn’t matter if he violated the law or not. Goodell said the following to Ben, prior to his suspension,

“My decision today is not based on a finding that you violated [the] law, [Y]ou are held to a higher standard as an NFL player, and there is nothing about your conduct . . . that can remotely be described as admirable, responsible, or consistent with either the values of the league or the expectations of our fans. . . . Your conduct raises sufficient concerns that I believe effective intervention now is the best step for your personal and professional welfare.”

That accurately describes Ezekiels actions in these two videos.

Then after he managed to get the top down, he went again.  WTF!  Watch.

It’s like he’s 10 years old and has never seen a boob before.  Well, now he’s the boob.  And with an open domestic violence case pending, something like this could easily push a decision against him. With domestic violence, the burden of proof by the accuser is much different.  You don’t have to prove that things happened beyond a reasonable doubt, your goal is simply to prove that the violence more likely happened than not.  When I see these two videos, and realize how stupid Elliot is, nothing is out of the question.  A jury will be thinking the same way.  Good luck Zeke!