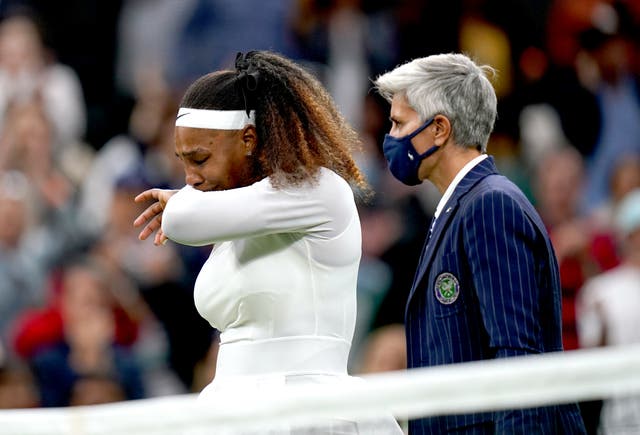 It was heart breaking to watch. Serena’s quest for her 24th Grand Slam title was cut short in the first round at Wimbledon. She suffered an ankle injury during her match against Aliaksandra Sasnovich. She slipped and hurt her left ankle. She went down and had to be helped by the chair umpire. By the end, the pain proved to be too much and she was forced to forfeit her match. She left the court to a standing ovation and tears in her eyes.

Serena later addressed her exit on Instagram. She stated,

“I was heartbroken to have to withdraw today after injuring my right leg. My love and gratitude are with the fans and the team who make being on centre court so meaningful. Feeling the extraordinary warmth and support of the crowd today when I walked on – and off – the court meant the world to me.”

While Serena faced her usual critics stating that she should retire and calling her a crybaby, her injury was legit. In fact she was not the only person to suffer from the extra moist conditions at Wimbledon.

Seven-time Wimbledon champion Adrian Minnarino was in the middle of a great bout with the legendary Roger Federer when he slipped in the fourth set and had to retire from the competition. On opening Day Novak Djokovic and Jack Draper also repeatedly slipped during their match. The All England Club addressed the conditions of the court with a statement,

“The preparation of the grass courts has been to exactly the same meticulous standard as in previous years,”

THE WEATHER CONDITIONS ON THE OPENING TWO DAYS HAVE BEEN THE WETTEST WE HAVE EXPERIENCED IN ALMOST A DECADE, WHICH HAS REQUIRED THE ROOF TO BE CLOSED ON CENTRE COURT AND NO1 COURT FOR LONG PERIODS.

“This is at a time when the grass plant is at its most lush and green, which does result in additional moisture on what is a natural surface. With each match that is played, the courts will continue to firm up.”

Federer further confirmed the dangerous conditions after getting a walkover, after Minnarino was injured,

“Oh, my God, I can’t believe it. It’s obviously terrible that it’s back-to-back matches and it hits Serena as well. You do have to move very, very carefully out there. If you push too hard in the wrong moments, you do go down”

I say all to this because as with every event that Serena doesn’t win, you have a number of trolls calling her a cry-baby and saying that she should retire. She is ranked number 8 in the world. Most women never make it to the top 10. I would argue in women’s tennis, if you are in the top 50, you have a good chance at a Grand Slam victory.

In 2019 Serena was ranked 10, in 2020 she was 11 and this year she is ranked 8. Now is the best time for her to get number 24 and I say she should continue to go after it. Hell, Roger Federrer is 39, has had 2 major knee surgeries and is worth more than $900 Million dollars and I don’t hear anyone telling him to retire?

Serena is skipping the Olympics this year and her next Grand Slam event will be the US Open on August 30th. Maybe the universe is allowing her to get number 24 in the states in front of a home crowd. That would be amazing and I can’t wait!