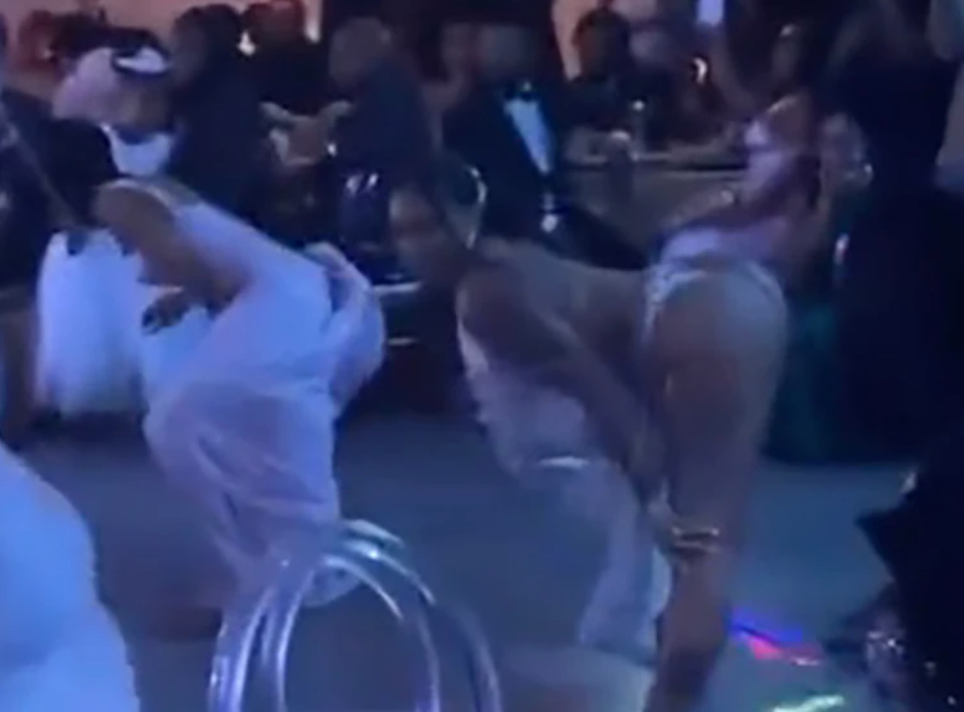 The Internet Is Split Over Twerking Bride Who Put On A Thongalicious Show At Her Wedding!

Oh lawd. Is this what weddings are like now? If so, I might start actually accepting the invites!

A bride in Florida (of course) went viral this week after video filmed at her reception shows her giving the groom a raunchy lap dance in a backless dress, apron style, with nothing but a thong underneath.

And yes, she did this as their friends and family watched in the background.

In the eye-popping, now-viral video, which had amassed more than 2.9 million views on Twitter as of Tuesday afternoon, a barefoot Rochelle is seen pushing a little boy out of her way as she struts over to her grinning groom, who’s seated in the middle of a dance floor.

Then, draped in the bedazzled halter dress and matching G-string undies, the buxom bride bends over and wiggles her rear in her new hubby’s face while her bridal party busts a repetition of sultry moves to Beyoncé’s sexy single ‘Dance for You.’

This woman even got her bridesmaids to join in. They backed her up, twerking behind her, and even got down on all fours with her toward the end of the twerk-a-thon.

Her family and friends cheered in the background. We imagine there was one uncle who cheered a little too hard, which resulted in an elbow to the stomach from his wife.

The internet ain’t cheering as loudly for this bride though. One user wrote…

Everything here is tacky. The twerking bridesmaids, the barefoot bride, showing [her] whole a— in front of your entire family, just one big ghetto mess.

Doing a lap dance routine for your husband wearing next to nothing in front of his closest friends and both your families is beyond ghetto lmaooo that’s not even the right word to define it yet I can’t even quantify how wildly tacky this is.

A lot of people wrote similar comments, but some people supported the bride’s decision, after all…IT’S HER WEDDING!

Where do you stand? Did the bride go too far? Or is the internet just jealous?