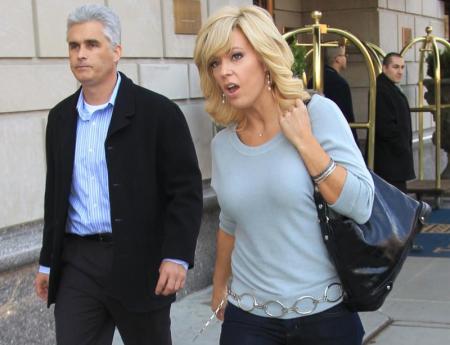 Is Coupon Cabin Paying Kate Gosselin Enough to Hire a Bodyguard? Cause Steve is Still Around.

Last week I told you that Ms. Kate Gosselin was super strapped for cash after her show Kate Plus Eight was cancelled.  To make up for that, she got a job with a website called Coupon Cabin as a coupon blogger.

Well maybe a blogger pays better then I thought because she still employs a bodyguard to protect her when she goes out.  I’m not sure what this blog is doing wrong, but it appears that her new gig with Coupon Cabin might pay more then nursing and enough to hire a bodyguard!

She stated to radaronline,

“The scary reality is, 12-hour nursing shifts every day wouldn’t let me continue to provide well for eight kids, essentially on my own. When you think about it that way, it gets really scary,

HE IS DEFINITELY GUARDING HER BODY!

I think she can afford a bodyguard because he’s cheap.  Maybe even free.  Longtime bodyguard Steve Neild accompanied Kate when she went out for dinner in Chi-town and when she recently traveled to Australia.  The only problem with the romantic angle is that Steve is a married man.

Back in 2009, it was rumored that an affair with Steve was possibly the reason for her break up with Jon.  Kate was super quick to put that to bed…maybe even too quick.  Kate sad,

“There is no affair. There never has been an affair. We are very good friends with him, his wife and family.”

But even Jon had is suspicious back in the day.

I speculate, but I don’t know — that’s a general feel, You know, almost like when they were traveling together, I felt jealous. Here I’m Mr. Mom. And then there’s some other guy traveling with my wife.”

For now, maybe it’s just innocent and she is making a crap load of money and can afford it  The question is, why does she need it.  I don’t see even the most hated reality stars getting their body’s protected.