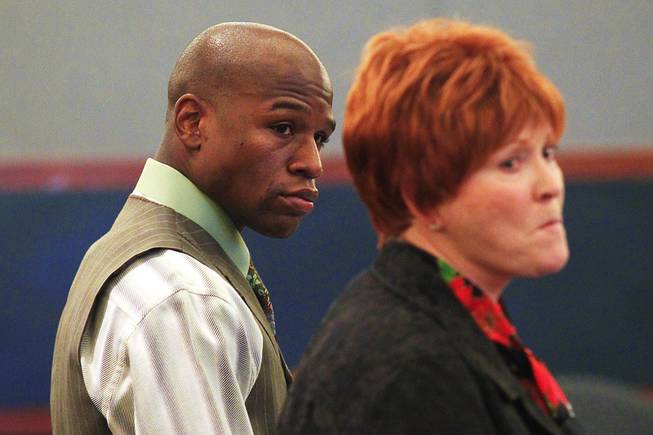 Mayweather couldn’t out box or out charm his female Judge today.  Judge Melissa Saragosa hit the undefeated champ with a knockout blow – 90 days in jail.  She stated during the sentencing,

“No matter who you are, you have consequences to your actions when they escalate to this level of violence,”

“One unique aspect of this case, that I think is different from the others I see on a regular basis, is the extent that this happened in front of children old enough to know what’s happening, A period of time of incarceration will send the right message to the community and to his children that no matter who you are, there are consequences to your actions that are appropriate when this level of violence is inflicted.”

After the holidays, Floyd will be reporting for his orange jumpsuit on January 6th.  The original sentencing was for 6 months but he instituted a plea bargain that suspended 3 months in exchange for 100 hours of community service, completing 1 year of domestic abuse counseling and a $2,500 fine.  By pleading he also avoided going to trial on felony charges which could have lead to 34 years in state prison.

The May 5th date that was being thrown around as a potential date that Floyd would fight Paquiao is now in question.  They went as far as to reserve the MGM Grand but never officially announced an opponent.  Training camp is typical 8 weeks and although Mayweather could possibly get a few weeks off for good behavior, this is not the situation you would want to enter going into, indisputably the biggest fight of your career.

Despite Floyd’s lawyer going to bat for him, citing his many good deeds and charitable donations, the judge was not buying it….this time. When you read the details of the incident you are thinking that Harris is some sleazy baby’s mom, but she is hot and ….dating, that is what sparked the incident.  Mayweather allegedly read text messages on Josie Harris’ phone … which included messages from C.J. Watson, who plays for the Chicago Bulls. According to reports, Mayweather screamed, “‘Are you having sex with C.J.?’ Harris replied, ‘Yes, that is who I’m seeing now.’”

That’s when Floyd flipped out.

Floyd pleaded guilty to attacks on Josie Harris.  He admitted to performing the attack in front of their 9 year old and 10 year old.  He twisted the arm of Harris and pulled her hair.  The attack was so frightening to the children that his 10 year old son ran, jumping over a fence to get security.

Floyd’s arrest record is now getting longer than his boxing record.

With the nick name “Money”, fines do not phase Mayweather.  He has been earning $20 million per fight and getting another $15 to $20 Million of the box office proceeds from the paid per view earnings.  With a networth of an estimated $90 Million, I believe the nickname is adequate.

Bottom line, if Floyd doesn’t straighten out his act, all his Money will be for nothing.  As I am a huge Mayweather fan I hate to see this.  The problem is when his circus act gets out of hand, he is standing before a jury and courtroom of people who take his actions personally, not to mention domestic abuse is a serious issue.  He is putting his  fate in the hands of a judge that he can’t out maneuver and out fox.  He makes more money in one week, acting like a fool and breaking the laws that these judges spend their careers trying to enforce, and they will continue to make an example out of him.  Inevitably if he continues this behavior he will go down.  Hopefully he takes these 90 days as a warning and a blessing.

Only time will tell.