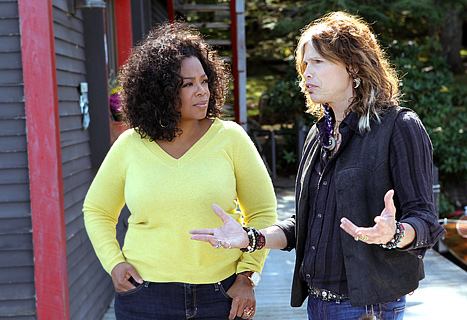 Review: Oprah’s Next Chapter – Could the Show Boost “OWN’S” Ratings?

What better way to bring in 2012 then with some Oprah?

After seeing all the huge ads, some of which ran on this website, I was pumped to see what “The Big O” had in store.  Her new show is officially called, “Oprah’s Next Chapter”.

She said that it would be a different type of show. She would be on location, similar to when she visited Ralph Lauren at his ranch. No audience, no big cushy chairs, no Oprah coming out to a huge round of applause.

OPRAH GOT HER MO JO BACK!

I have to admit, time off has done well for Oprah. She went back to her interviewing style of 10 years ago. When she asked a tough question, and actually waited for an answer, listened for real, and came back with a relevant question.  If you noticed in the last 2 years of her ABC show, she was very robotic when interviewing celebrities, shaking her head and “Um-hmming” on auto pilot.  Last night she was more natural, wearing Jeans, she appeared relax and in the zone, hitting the 63 year old Steve Tyler with some semi-difficult questions.

I think part of the likability of this show was Steven Tyler himself.  We are just all super curious about the guy.  What makes him tick and what is he thinking.  Oprah tries to peel the onion and does with some success.  He discussed how he recently spent the last days with his dying father, a moment where you gain a whole new respect for the man.  Oprah also talks to him about his drugs, even saying once,

“I’m surprised you are still alive”.

It was obvious she had been waiting for the perfect time to make that statement and was hoping for the impact that it had.  She also interviewed Tyler’s daughter Mia and fiancé Erin Brady during her visit.  BTW – Tyler’s house is CRAZY NICE! TWO HOURS – MUCH TOO LONG

Two hours was too-too much.  I think this was a special for the Season Premiere, going forward the shows will be only 1 hour in length.  If you were going to pick a show to make 2 hrs, it should be the upcoming episode with Sean Penn in Haiti, or the one with George Lucas.  Even then, I wouldn’t make them two hours, instead shoot them as two, 1 hour episodes.  That would be perfect.  The first thing they taught me in my online school production class, was to keep your audience interested and then wanting more.  After about 1 hr and 15 minutes I was neither interested and I certainly didn’t want more.

It gets over the top sappy when the two are holding hands, and talking about how they admire one another.  I’m not one for all that sappy crap, but I’m sure people were eating it up.

WILL THIS BOOST OWN’S RATINGS?

Will this show help Oprah’s ratings.  Absolutely. The OWN network needs to see more Oprah.  Period!  Without that it will continue to struggle in the ratings.  As we are learning quickly, just because Oprah loves Rosie, doesn’t mean her fans do.  What I see, is eventually Oprah having another daily show, in a last ditch effort to save the channel.  She would then re-launch other careers similar to Dr. Phil and Dr. Oz, but this time onto her own show.  The recipe worked once, it could work again.  The question is if Oprah wants to do that much work!