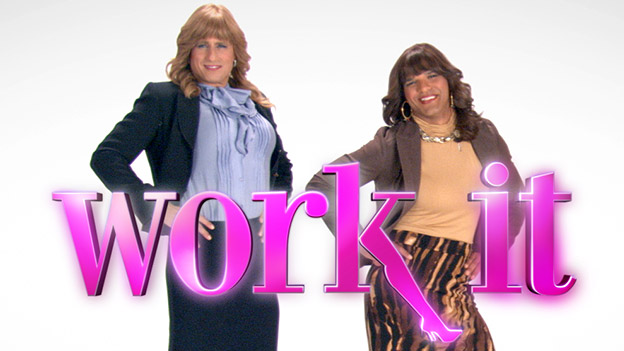 ABC’S “Work It”, Simply doesn’t Work. A Sad Attempt at and outdated Schtick. As a fan of 1980’s hit “Bosom Buddies”, about 12 minutes into “Work It”, you realize that “Bosom Buddies” would just not work in today’s day and age.  Some things like CD’s, Pagers, and road maps have fallen by the waist side with the evolution of society, and so has laughing at men dressing in drag.  You realize it, but somehow the executives at ABC didn’t.

The false premise of the show, is the great Man-cesstion; where the conspiracy theory of three ex-Pontiac employees is that the world is out to empower women by giving them the power of a pay check.  Hmm..interesting? Not really, because that’s not really the premise.

The premise is dressing as a woman to get a job.  There is no genius, no complexity, and sadly very little thought behind it.

The two leads are played by Amaury Nolasco as Angel Ortiz and Ben Koldyke as Lee Standish.  They take jobs as pharmaceutical sales people.The reasoning behind hiring only women for these jobs is acceptable but flimsy.  If you are going to develop an entire sitcom around this concept, a better job, in a better industry could have been used.

The reasoning and the job could be overlooked because after the two are hired, we really don’t need to revisit, why or how.The office politics and interactions with the co-workers is just not funny.  I think my biggest issue is that Angel and Lee don’t look like women.  Actually Angel can get away with it however Ben Koldyke, was a Darmouth College Football player and doesn’t even come close.  The supporting cast consists of petite women which make the Lee character look like the linebacker he is, with hands the size of dinner plates. This is the type of show that you would see on a cable network, following a Tyler Perry sitcom, or perhaps an ‘In Living Color’ skit.

On top of all these miss-steps, the show tries very hard for laughs.  For ABC to be a family friendly network, there are some borderline offensive jokes.  At one point Lee is explaining that his new sales job is at a pharmaceutical company to which Lee replies,

In a show like this, that joke comes off offensive and out of place.  If it was on “The George Lopez show”, a show about Hispanics fitting into a non-hispanic environment, it would have been much more appropriate.  That joke is indicative of the desperation felt as the writers try to pull in comedy from anywhere they could find it.  Like a man falling helplessly with flailing arms trying to grab a hold of anything that will keep him from continuing his plummet.

Because of the distraction of the drag, the leading men can’t be funny.  It’s just too hard.  The whole thing is more ridiculous and sad then funny.  It’s more skit then a well-developed comedy on a major network.

The biggest fear is that the buffoonery will lead to the acceptability of such mockery, to the transgendered community, some who look exactly as the characters do.Actually a comedy about being a transgendered person in the work place might have been less offensive, and more educational than “Working It”.

If you were going to cancel “Man Up”, ABC should have at least replaced it with something that resembled television.

I rate this, “Don’t waste your Time”.