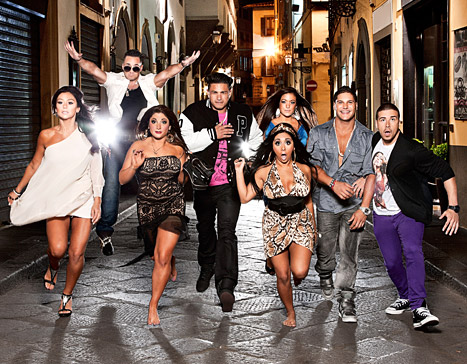 A Pregnant Snooki Signs on For Season 6 of Jersey Shore, Along with the Rest of the Crew. If people watch, they will come.  Period!  As long as people are tuning in, MTV will keep filming.  The entire gang will be returning for Season 6, the question is, will I? Or anyone else for that matter? Are we burned out on the Jersey Shore?

It doesn’t matter.  The 6th Season is scheduled to start filming right in the midst of Snooki’s pregnancy. The genius producers realized that a pregnant Snooki is just enough to get America to continue watching the weekly train wreck we all know and love (or hate).

An MTV rep released a statement and told us what to expect,

“MTV gets ready for fist pumps and baby bumps.  America’s favorite housemates will all return to their home-away-from-home, and the house dynamic is headed into unchartered territory . . .as their lives outside the ‘Shore’ take off in exciting new directions.”

“While things will definitely be a little different this time when they hit the boardwalk, their trademark hilarity and family dysfunction will remain the same.” Although it’s not clear what will happen with JWoww and Snooki’s show as a result of Snooki’s bun in the oven, Pauly D’s show is still ready to air . “The Pauly D Project” will premiere this month on March 29th and will follow Pauly around the country as he does his thing as a G-Unit label signed DJ.  As luck (or MTV producers) would have it, he will be available for a sixth season of the Jersey Shore and as told to MTV, he would love to do it.

The next unanswered question is – how much will they be getting paid per season this time.