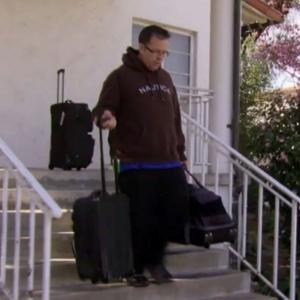 I’ve mentioned before how good the biggest loser has been this season. Well this last episode got even better.  Better in regards to drama but not in regards to me liking the contestants.

This episode came on like a movie.  There was a camera crew filming the camera crew as they scanned all the rooms with no one in them.  As a spectator at home, you have no idea what’s going on.  After about 45 seconds of empty rooms you see Mark (Cornelison) packing, then you see all the contestants packing and walking out; refusing to play the game any longer.

Then the producers tell Bob and Bob goes and gets Dolvett….and then it’s on.  Both Trainers then march off to find out exactly what is going on.  It’s all very dramatic, all very well done.

WHY WERE THE CONTESTANTS WALKING OUT?

It seems that the remaining contestants were pissed off that three of them would be going home and that someone who was sent home weeks ago could come back and compete for the $250,000 grand prize.  The contestants thought it wasn’t fair and rallied together to stage a walk out.

My thoughts were, HOW DARE THEY!!

NBC had the upper hand and they knew it.  When you weigh about 1000 lbs, have no hope and no future, guess what? You will sign your life away. You will sign and agree to anything, especially if you have nothing to start with. That’s exactly what these guys did.

The producers played it smooth.  They contacted their lawyer and he sat down with each of them separately and showed them where in the contract that they agreed to allow someone being able to come from home and get a chance to compete in the finale.  In their minds at the time, their self esteem was so low, they probably never though it would actually be them left in the house so they probably expected that they would need that second chance.

The lawyer also very eloquently explained it from the perspective of the person who is sitting out at home and has always been counting on the chance to come back.  If NBC changed the rules and the contestants who are training at home weren’t allowed back at the end to compete for a spot in the grand finale, that would not be fair to them.

SO WHO STAYED AND WHO WENT HOME?

Allen “Buddy” Shuh and Mark Cornelison ended up going Home.  Mark had almost nothing to lose and felt that he wasn’t going to win and Buddy….Buddy was just plain stupid.  He could have easily won the entire thing.  His wife might leave him because he went back to Michigan leaving a quarter of a million dollars on the table.  He worked hard enough and had the mental fortitude to win the entire thing, and just like that…he gave up. In my mind, I think Conda and Jermey had no plans on ever quitting.  They just wanted to see if they could get Mark, Buddy and or Kim to leave; which they did.  Now they were guaranteed to have a family member in the finale.  On top of that I believe Jeremy  threw the final challenge so that his sister can be in the finale.  He wasn’t that upset on the scale, he only lost 10 lbs (which is one of his lower weigh ins) and he had a front row seat watching Kim during her workouts so he knew that she was killing it.  He knew he would have to at least pull a 15 to stay on the ranch.  Who knew that Kim would be the one pulling the 15.

With the highest weigh loss for the week, Kim also won a Ford Escape, something else that Buddy gave up as he could have easily posted the best number in the house.

NBC IS LUCKY I’M NOT A PRODUCER!

I would have sent their ungrateful asses all home.  I would have brought back 3 of the best at home contestants and finished up the season.  Furthermore, I would have charged all the contestants who left the house for food, shelter, personal training sessions, usage of the gym, doctor visits, dietician fees and all the clothes from the makeover and airfare for the three trips they took this season.

Then they would have the option of either paying the huge bill, or coming in an watching the finale and agreeing to an interview afterward.

Don’t think that might still happen to Buddy and Mark.  It’s important that the world knows that you can’t just walk out of these agreements. They are real life contracts and are enforceable.

We’re not into faking anything, and there’s not a lot we want to hide on this show. When the guys quit, it bummed me out, and I was so hurt . . . I didn’t look calm and cool [on the episode] because I cared so much and worried they were thumbing their noses [at the show].

“I was more dramatic than they were,” he says. “I was so mad —and they were all so calm and cool.”

They’re off for good. That’s the rule — if you leave, you’re quitting the show,”

“They’re still trying to justify it, Buddy [Shuh] had a real shot at a quarter-million dollars and really needed the money. This is a five-month show and enables [the contestants] to talk to their families, who report back what people are saying. Buddy and Mark are both preachers and have to be careful with their image.

“But the next day, when they were leaving the show, I invited them to the finale.

“They’re part of the family, and while I don’t agree with what they did, I still want them to be a part of this.”

Kudos to Dolvett Quince once again playing it cool and displaying the ability to say the right thing at the right time.  The last thing you want to do is pull a Ann Kournikova and push people when they are in an emotionally unstable place.  Then they would resent him which would make it hard for him to train them and he would get the negative feedback putting his job in jeopardy.  He was confident that NBC and their legal team would be the bad guys and he could take his frustrations out on them in the gym.  Very well done – but I could see the expression on his face – He was like, “The Audacity!”

Next week all the old contestants will come back to compete.  The funny thing is Mark’s son Chism and Buddy’s brother Ben will be amongst those coming back to earn a shot in the finale.  They were prepared to take that opportunity away from their loved ones because they were too afraid to compete.

Buddy and Mark – You Two Are; THE BIGGEST LOSERS!!