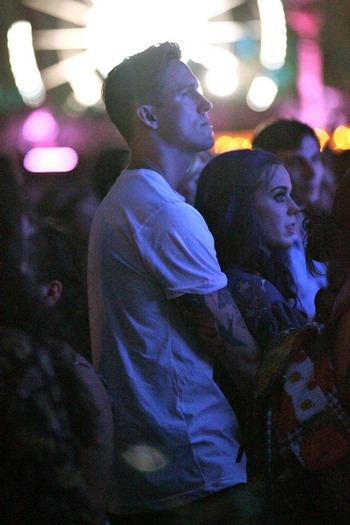 I guess Babtiste Giabiconi was too cute for Katy Perry because she has left another broken heart behind and has moved on with Robert Ackroyd.  The brief affair with the world’s highest paid male model was over before it started.

Before things got serious with the model, “Coacchella” happened.  There was just too much PDA at Coachella between Robert Ackroyd and Perry for it to be denied and there are finally some really good pictures of it!

They were first seen holding hands two weekends ago and that hit the internet like wild fire.  That wasn’t enough for me to make it official.  Then this weekend she left little doubt, they were all booed up.  Kissing, cuddling, and all over each other – even a behind the back, lean back kiss! Maybe they were putting it on a little too much……Like a “Look at Me Russell” type of PDA.

Sunday when the camera’s came around there was no hiding anything. Perry’s marriage is still not over.  There is a mandatory six moth waiting period in California so the divorce will not be final until this summer.  That is supposed to give couples some thinking time.  It looks like Katy has had all the time she needs.  And apparently from Ackroyd’s twitter, he had the best weekend EVER, the Florence + the Machine guitarist tweeted,