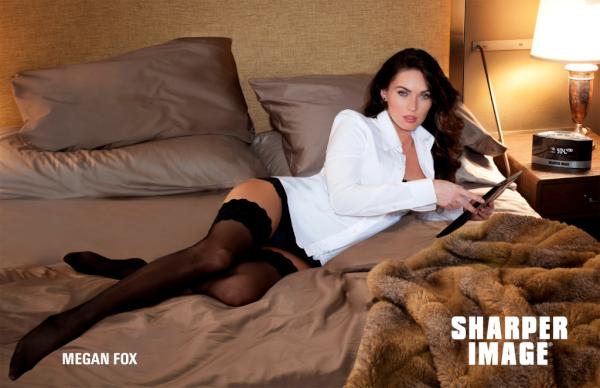 Big ups to Steve Jones for going where he was told not to go.  During an interview for Entertainment tonight he almost had Megan Fox trapped in a corner.

The original interview was to discuss her new sexy Sharper Image campaign, a photo from which you can see to the right.   Shaper image hired fox to do some very sexy photos, which is quite unlike the quirky chain so it was definitely newsworthy.  As Jones lull’s Megan in, he’s all charm, smiles and accent and then goes in for the kill with a super lame transition.

After asking her about her favorite gadget, he says,

“Do you know the ultimate gadget that every man wants? A baby?”

Fox is shocked.  Her face says, WTF, but her mouth says,

Right before Megan could answer the question you can hear her publicist stopping her.  You can here it faintly in the background,

“I’d like to formerly apologize to Ms. Fox for attacking her with the word ‘baby.’ Thankfully, there was a publicist there to stop me.”

The buzz is strong that her and Brian Austin Greene are expecting. I’m sure she is just waiting the 12 weeks before breaking the news.  This might be only week 3 or 4, so we have 8 more weeks of speculation.