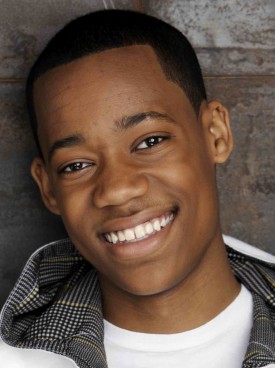 Determined not to go the route of Steve Urkel (Jaleel White) and be type casted for life, Tyler James Williams has landed a new role in another comedy on a major network.  The show is Mathew Perry’s newest television series called “Go On”.  Perry plays a sportscaster who is part of a group therapy session to help him with grief he is experiencing from a loss. (I’m annoyed because I can’t find out what he lost, I’m assuming it’s a wife or girlfriend).  Tyler James Williams is a member of that therapy group.  The show has been green lighted for 13 episodes and hopes to make NBC’s coveted Thursday comedy lineup.  Williams will be playing a character named Owen.  His grief is due to a brother who is in a coma as the result of a ski accident.

Perry will also executive produce and has tapped Friends writer/producer Scott Silveri to assist.  So this is a solid project and a huge win for Williams.  If this pilot didn’t work out Williams also played Martin Lawrence’s son in his CBS Pilot.  He’s funnier as Martin’s son, but stands a better chance for longevity hitchin is trailer to Perry, NBC and the Friends crew.  Either way, Everybody LOVE’S Chris now!

(Except his name is Tyler, but you get the joke right….)<insert groan here>.