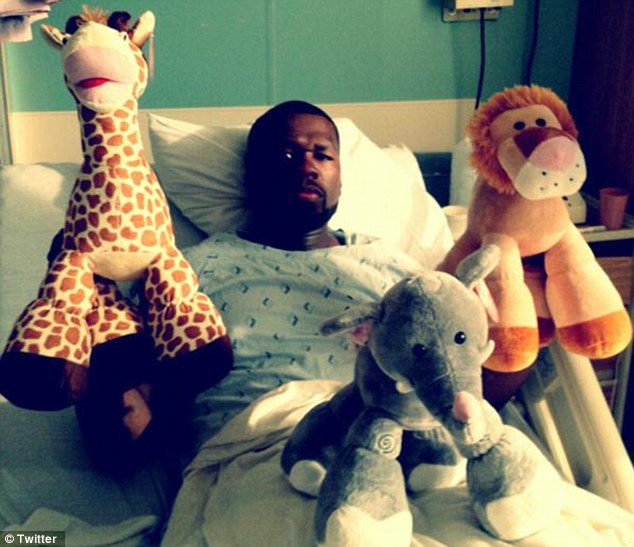 50 Cent Hospitalized For what Seems to be a Stomach Virus, Tweets Pics but Doesn’t Confirm What’s wrong.

There has been a ton of speculation as to what is wrong with 50.  The rapper/businessman was rumored to be hospitalized when finally he confirmed it himself with a twitter pic and a tweet.

‘I’m in the hospital but my gangsta grillz LOST TAPE is done so it will be out on time.’

Like I said, he’s a business man, taking the opportunity to promote his newest mixtape.  The picture is a little crazy as he surrounded by stuff animals like a beyatch but who am I to judge.  DJ Drama, who is working with Fif on the Gangsta Grillz mixtape tried to calm the fans.   He spoke to XXL Magazine telling them that  “Fif was suffering from a stomach virus”.  He said,

‘First they wanted to keep it quiet (50’s illness), but he’s not a quiet guy.

‘He should be cool. It’s nothing that serious. We still gonna do our promo (scheduled for tomorrow).’

50 seemed in good spirts because he joked that working with DJ Drama is what caused him to get sick, Do not do a @djdrama gangsta grillz this is all I get.  Ain’t tis a b*tch. I give 15 tracks you give me this”

After being shot 9 times a stomach virus must seep like the hiccups.  But then again, those were tougher times.  I’m sure there were no stuffed animals in that bed.