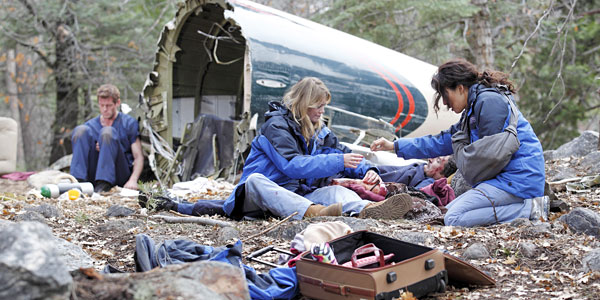 This is a spoiler Alert for sure.  If you haven’t watched Grey’s Season finale yet, the stop reading.  If you have, and have been a Grey’s fan from the beginning it leaves you with many more questions then answers.

The season finale delivers some huge blows and they start right from the very start.  I was wondering how they were going to out do the Hospital Shooter Season finale, now my questions have been answered.  A plane crash and getting rid of two characters.

Yep you heard that right.  Lexi!  Like most fans of the show, I wasn’t upset about Lexie’s death but I was shocked.  She was emerging as one of my favorite characters and the touch and go, on and off again romance with Mark was a HUGE storyline.  In one of the most dramatic scenes I’ve seen on TV all year, Mark does get a chance to say good-bye but he is not only saying by to Lexie, but to all that we were hoping to see between the two.  As Mark is telling her that he loved her, and that they would be happy together, and marry and start a family, you realize that is what we all wanted for them, and with her death comes the death of our expectations.  For that, people, fans, and bloggers are pissed.

It appears that Teddy is out. She gets an opportunity to be a teaching surgeon for the military and passes it up to stay with Own in the wake of him losing Cristina.  This revelation unfolds in another breath taken performance by the cast, in an operating room, donning hospital masks.  All you hear are the words, but the characters eyes, including Bailey who’s just listening and watching tell the complete story.  Teddy confesses that her loyalty lies with the hospital where she met her husband and where he died.  Owen puts an end to that by firing her.  Then you find out that it’s real, he has already informed the board.
With everyone aware that it was Patrick Dempsey’s last Season, we just assumed that he would be on his way out.  Instead you get hit with these two blows.  After the Season Finale aired, Shonda Rhimes took to twitter to post a “Twitlonger” about the episode,

WARNING. IF YOU HAVE NOT YET WATCHED THE SEASON 8 GREY’S ANATOMY FINALE, DO NOT READ THIS SUPER-LONG TWEET. Okay? Seriously. Last chance…

Okay. Callie said it best tonight: Life changes in an instant. Turns on a dime.

This finale was incredibly hard to write. I did not enjoy it. It made me sick and it made me sad. We end the season not knowing ANYTHING about the future. Except for two things. We know we are definitely saying goodbye to two of my favorite people: Chyler Leigh (Lexie) and Kim Raver (Teddy).

I know this season’s finale had some surprises for viewers and the exit of Kim Raver was one of the big ones. But Kim’s series option was up and she was ready to give Teddy Altman a much-needed vacation. It’s been a pleasure working with someone as talented and funny and kind as Kim; everyone is going to miss her terribly. I like to imagine that Teddy is still out there in the Grey’s Anatomy universe, running Army Medical Command and building a new life.

I love Chyler and I love the character of Lexie Grey. She was an important member of my Grey’s family. This was not an easy decision. But it was a decision that Chyler and I came to together. We had a lot of thoughtful discussion about it and ultimately we both decided this was the right time for her character’s journey to end. As far as I’m concerned Chyler will always remain a part of the Shondaland family and I can’t wait to work with her again in the future.

I’d write more but I’m honestly too sad. I don’t like life changing in an instant and turning on a dime.

Thanks for watching Season Eight. We are, as always, grateful that you joined us for the ride.

It just doesn’t stop there.  The plane crash victims are still there.  Meaning….they are still where the plane crashed.  The Season ends with Patrick Dempsey sustaining major damage to his hand- I’m thinking that’s how he would exit.  He will not be able to operate.  He’ll save his hand but he would have to move on.  He’s a freaking brain surgeon for crying out loud.

Karev, another character that you love watching because you hate him, he’s decided to go to John Hopkins and the ladies newest favorite Jackson who is going to Tulane.

Like I said, there are more questions then answers.  The fact that Shonda can conjure up this much emotion and intense reactions shows why she’s at the top of her game.  Me, yeah I think it’s sh**ty that Lexie died but I also know at the end of the day it’s a business and Chyler Leigh’s (Lexie’s) performances on Grey’s will just be the beginning of a long career for her.