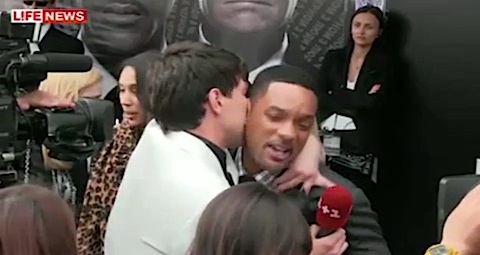 Will Smith Pushes and Then Backhand Slaps A Reporter Who Tries to Kiss Him!

This is just hilarious.  Hopefully Will Smith doesn’t receive any backlash from this, but I’m sure it’s bound to come.  The incident occurred during the Ukrainian premier of Men in Black 3.  Smith is walking through the press line when a young Ukrainian reporter goes up to hug Will.

When you watch the clip, and you will watch it twice. The reporter goes in for a kiss.  Will assumes at first it’s a hug and is already somewhat overwhelmed. You can hear him say,

And then hugs the guy patting him on the back twice.  Way more touching then should be allowed already.  But the reporter wanted more, he wanted Will Smith’s lips and goes in for a smooch.  It’s not a European cheek kiss like news sites try to describe it, it’s a full on lip to lip kiss.  It would have happened but Will Smith channeling his Muhammad Ali days, fakes left, then the reporter tries again and Will fakes right.  Then, like any straight man who is trying to be kissed on the lips by another straight man, he pushes the reporter off.  You can then hear Smith say,

“Come on man, What the hell is your problem, man?”

Then he hits him with a light back hand to the chops!  “Pop”.  It’s hilarious.  Then smith says,

He tried to kiss me in my mouth, He’s lucky he didn’t get sucker punched.

The he looks at the camera and says,

Sorry, I said that on camera.

The best part about the whole clip, when will pops dude, the crowd goes wild!!  Here’s the clip!