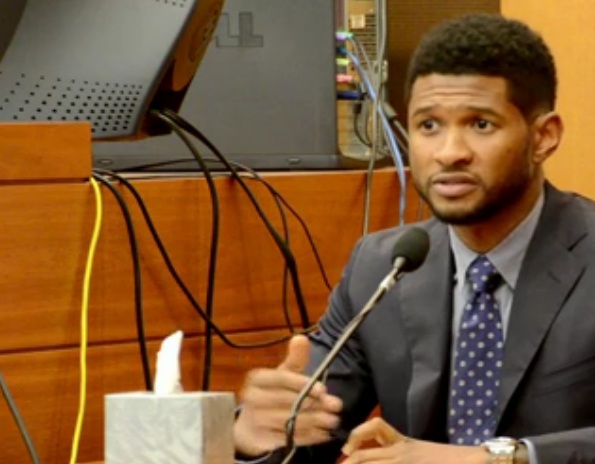 Usher Custody Battle, Things Just Got Real. Tameka Foster Accuses Usher of Sleeping with One of her Bridesmaids.

In case you didn’t think the Usher custody hearing wasn’t juicy enough, Tameka Foster just added more drama.  In court she said that Usher slept with one of her bridesmaids during their 2 year marriage.

The bomb was dropped when Tameka’s attorney starts questioning Usher about nannies coming in and out of their kids lives.  Then the questions began to center on one nanny in particular, Maya Fox Davis.  Then Usher was asked if the reason that she left was because he was found in bed with her!  D’OH!!!

Usher gave the big “What you talking about Willis” face.  Maya Fox Davis was one of their bridesmaids during their wedding in 2007.  It appears, which is somewhat normal in super rich people’s lives that they hired her, who was probably one of Tameka’s girls as a nanny for a pretty decent salary.   Well it appears her job came with a boner…I mean a bonus!  After the bomb was dropped the court in full cliff hanger style, went into recess.

This is the latest in an ongoing custody battle the two are having in court.  Usher was in tears this week after Tameka accused him of being a bad father and then posted a dramatic pic of himself in despair on facebook.  Tameka basically said that he would rather go to a night club then be with his children.  She must have forgotten that she’s married to USHER!!

She has also accused him of smoking weed, which he admitted and taking ecstasy which he denied.

Usher fired back with stories about how Tameka attacked his current girlfriend and spit on her in a jealous rage.  He said that Tameka yelled,

“I’m gonna kick your ass.  Bitch get out of the car.  How dare you bring this woman into my subdivision in my house”

She then pulled the door open and tried to swing on her.  He had to get in between the two of them and got hit by Tameka. When he drove off, she through a plate of food at the car.

I know we all remember how upset Usher’s mom was when he decided to marry this broad but this is a huge, “I told you so”.  There definitely is much more to this story to come.

Here’s a long clip of Usher testifying in court.