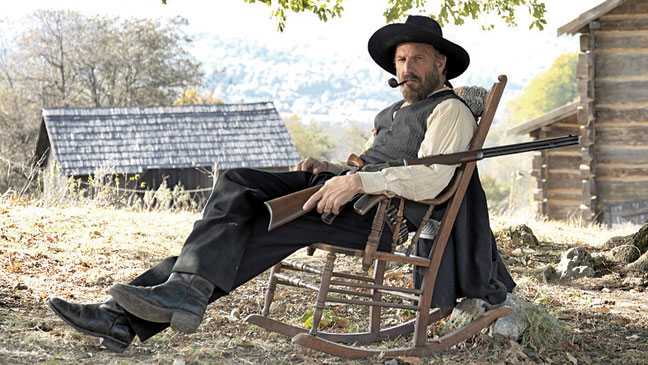 Hatfield’s and McCoy Review – The History Channel Nails it!

I have to say BRAVO.  I’m sure the History channel was a little gun shy after the entire debacle of “The Kennedys” which they relinquished to ReelzChannel just for the show to go on to win critical acclaim.  Not to let History dictate the future, the History channel jumped into “Hatfields & McCoys” with both feet and the result is nothing short of fantastic.

The Kevin Reynolds directed miniseries is packed full of star power and everything grandiose that comes with it.  The setting is Post Civil War in the Appalachian Mountains. Most of the six-hour film, which airs over three consecutive nights, was shot in the mountains of Transylvania; and in a studio near Bucharest.

I’m not a fan of period dramas and the costume design, art direction and intricate attention to detail never once let you forget you are in the West, however the script and interpersonal relationships are as modern as an i-pad.  The storyline is extremely relatable and complex enough to be engaging, but not too complex, thus allowing you to lose yourself in the thoughtlessness of a Wild West Shootout.

You almost forget how good Kevin Costner is but then you are reminded that he actually did a pretty decent job in the film Open Range as Charley Waite, and does an even better job (partly due to the storyline) as Devil Anse Hatfield.  The lead McCoy is played by Bill Paxton who coupled with Costner set the bar and expectations very high of this mini-series with in the first half hour.

I’m not sure if this is the real story of the Hatfields & McCoy’s but it’s convincing and you are immersed in it from the beginning.

Devil Anse and Randall McCoy served in the Confederate army together and during battle they both end up owing each other their lives.  Tired of the fight Devil Anse leaves the military which pisses off the holier then thou, self righteous Randall.  To make matters worse, Randall is captured and becomes a POW.

After finishing his tour and returning home, Randall sees that not only is Devil Anse doing well, but his whole entire family is eating good.   Randall’s family in comparison is barely putting food on the table.

Mix the jealousy with the forbidden love of a young Hatfield and McCoy and you have all the drama that you need.

As the story unfolds the feud is like a virus, or a tornado that engulfs everything and everyone around it.  Somehow, and this is why the script is so good, it’s remains clear without outright saying it that the two men are still in charge, Devil Anse and Randall.

In my opinion these two carry the show along with the script, the set and the writing.  Costner and Paxton are everything that you ever thought a cowboy was supposed to be, and then multiply that times 100.  Smoking? Yes they smoke so much you will catch a contact in your living room.  Shoot outs? Until you’re ready to pick up a gun and help out whichever family you are rooting for.  In the end, and I’m just speculating Costner becomes the hero because at any time he can put an end to it all.  He’s just having too much fun.  Randall is like that annoying friend that has just found GOD and forsakes commonsense for bible verse.  He doesn’t realize how sinful his religious ways really are. When the smoke clears the obvious thing is that the History channel has a clear winner on its hands.  13.9 million total viewers tuned in for the first episode.  Nancy Dubic, History’s president patted herself and her channel on the back for a job well done.  She stated,

“With all the success we have had at History, we felt strongly for some time that we should own historical drama, and in true History fashion, we have done it, with – pardon the pun – guns a-blazin!

We couldn’t be more proud of the entire cast and crew … from Kevin Costner, Bill Paxton, Mare Winningham, Powers Boothe, Tom Berenger, and everyone involved in truly making history!”

It will be sad to see the series end, but sometimes it’s good to stay wanting more.  Next on the scripted list for History is Vikings!  Vikings chronicles the Norsemen who fought their way through medieval times. It’s set to premiere in 2013.  Let’s Go!