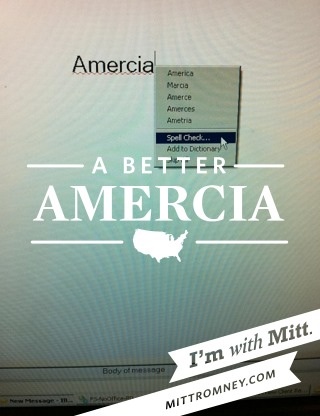 Mitt Romney’s iPhone App misspelling is turning out to be a bigger deal then bargained for.

He can thank the internet for that, and whoever he hired to create and launch the app.  The app was basically supposed to allow users to take a picture of themselves with 14 pro-Romney Slogans and then share them on the internet.  Not a great idea, but not that bad either.  Way to go Mitt, integrating some social media into your campaign.

In a quick effort to clean things up, Mitt’s people submitted an update to the app but as we know that takes a little time to work its way through the approval process at Apple, in the meantime the internet went after the app and has been going crazy with it.

The one thing that the app was supposed to do, is now doing the opposite.  It’s creating a mockery of Romney’s campaign instead of supporting it.  Some early tweets that came through were:

“Sorry about the shaking California, that was just the rest of America laughing at Mitt Romney running for Pres. of #Amercia,”

“If you’re applying for a job, and you misspell the name of the company you want to work for, you won’t get that job. #Amercia,”

“Amercia Is With Mitt.”

A tumblr site was quickly created and people began to post the pictures that they have taken with the App, pointing fun at Romney.  We haven’t seen this many jokes since the days of Bush.

Here are some of the best photos: