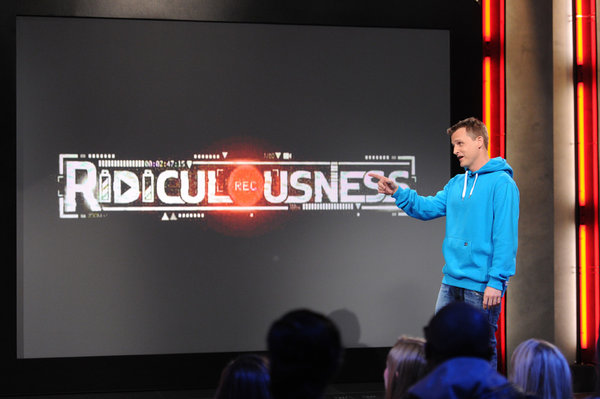 I knew it would be a matter of time before Tosh did something about Drydek and MTV’s Ridiculousness.  I think it took this long because Tosh probably thought the show would be on its last legs, but instead the show is doing well, they are starting to have Celebrity guests…like Floyd Mayweather.

Tosh has taken some subtle jabs in the past, but this is a straight body blow.  Tosh O decided to spark the beef up by creating a short video clip spoofing Drydek’s Fantasy Factory.  In the short skit, Tosh basically makes Drydek look like a rip off artist and a pedophile.  He shows Drydek’s Fantasy Factory as a place where young kids play around on razor scooters topless; as if, that is Rob’s fantasy.

The idea of having beef with @danieltosh is truly embarrassing…for real…imagine that “clip show host: beef…but the beef is now very real,”

“I am not a comedian or an actor so unfortunately for @danieltosh we are oing to have to settle this the old fashion way..#seeyousoon,”

Althoguth TMZ is stating that Drydek wants to fight Tosh, I highly doubt it, unless it’s with oversized gloves in a celebrity boxing match.  Drydek is not a fighter but more importantly he’s not stupid and does not want to go to jail or a lawsuit or both.

Tosh O who at this point was expecting some sort of response for Drydeck simply responded,

fair enough but if you have to beat me up, can we film it and put it on my show so people will actually watch it?

Cool…that would be a dream come true to be on the world’s very first video clip show TOSH.O,

I’m not totally sure how this will end up, but too funny guys fighting about nothing is pretty entertaining.  Plus you know with these two, anything can happen and when it does, it will wind up on Youtube.  Here is he spoof that Tosh O created below: