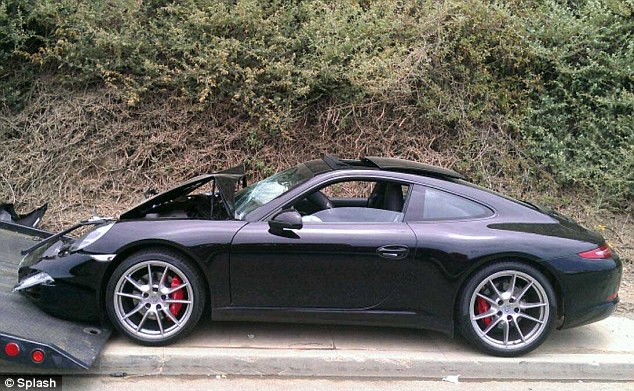 We learned late yesterday that Lohan had been involved in a pretty bad car accident, and now we have pictures to back that up.  It looks much worse than it was.

HOW DID THE ACCIDENT OCCUR?

Not a complex story at all.  She simply ran into the back of An 18 wheeler in L.A.  She was driving down the Pacific Coast Highway where she claims the big rig cut her off.  She was on her way to the movie set of her latest project Liz & Dick, a movie in which she will be playing Elizabeth Talyor.

Preliminary investigations show no wrong doing on Lindsay’s part and she didn’t appear to be under the influence.

The best part is, her assistant was also in the car with her but it seems like no one could care less.  This looks like a texting accident to me because it’s not a side swipe but a person who hit the brakes too late because they weren’t paying attention. I just hope that she signed up for the extra insurance, the Porsche was a rental!

Remember that from Sienfeld? “You better give me the insurance because I’m going to beat the hell out of this car”