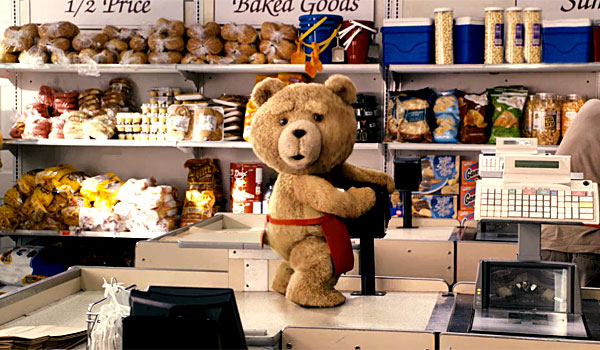 The TED R-Rated Trailer – You Have to See This, it’s Super Funny!

When I heard that Mark Wahlberg was doing a comedy that involved a Teddy Bear, all I could think of are the Eddie Murphy career killers (Yeah he made a ton of money but never regained his adult core).

Then I found out that creator of The Family Guy was behind this.  Then I found out it was R-rated.  So I was intrigued.  After I saw this trailer I was in.  There is no way that you can watch this 3 minute preview without laughing.  I just hope they didn’t use up all the funny parts on the trailer.   Who knew a Teddy Bear could be that funny – It looks like Wahlberg holds is own against the Teddy Bear as well.

Seth Macfarlane wrote and directed the comedy and he’s the voice of Ted. The theme of the jokes follows the same comedic formula as Family Guy but Macfarlane is able to turn things up a notch.  He has more time and more liberties and takes advantage of both.  Mila Kunis plays Mark Wahlberg’s, love interest and it also stars my favorite underrated actor Giovanni Ribisi.

Trust me, you won’t be seeing this trailer on TV anytime soon.