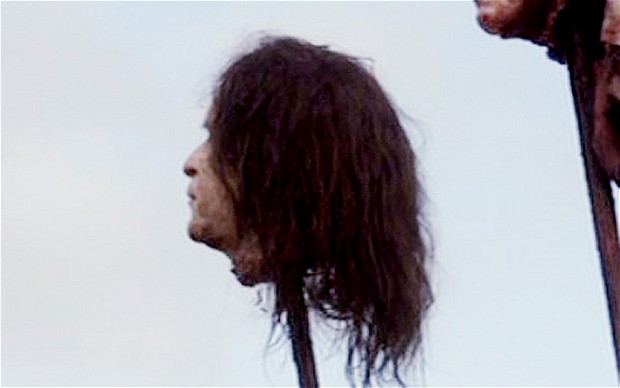 HBO has let “Game of Thrones” push the envelope too far.  They are catching some heat after a scene in which they showed a severed head of one of our US Presidents.  As much as you might hope it was Obama, it was actually George W. Bush.  If you have the Game of Thrones Season 1 DVD then in episode 10 you will see the GWB dome, if you haven’t made the purchase yet, it’s too late.  All shipments have been held and the scene is being removed by HBO.

The shows creators David Benioff and D.B.Weiss told on themselves.  In the DVD commentary they mention that the head can be seen in a few of the beheading scenes, but they insist that they were not trying to make any political statements. Basically they said the head is used because they had it in stock!

George Bush’s head appears in a couple beheading scenes, It’s not a choice; it’s not a political statement. It’s just, we had to use what heads we had around.”

The head is partially covered by a wig, but now that you know it’s there, it’s definitely George W’s head.  How the heck would they just so happen to have a head around??

Simple, they needed heads, so they rented them.  D.B. Weiss and Benioff explained in their apology,

We use a lot of prosthetic body parts on the show: heads, arms, etc. We can’t afford to have these all made from scratch, especially in scenes where we need a lot of them, so we rent them in bulk. After the scene was already shot, someone pointed out that one of the heads looked like George W. Bush. In the DVD commentary, we mentioned this, though we should not have. We meant no disrespect to the former president and apologize if anything we said or did suggested otherwise.”

HBO then issues an apology of their own,

“We condemn it in the strongest possible terms and have halted all future shipments of the DVDs, removed it from our digital platforms and will edit the scene for all future airings on any distribution domestic or international,”

So every one is sorry.

Before you jump to the conclusion that this was Hollywood liberals, and that the entire thing was done with purpose, do remember that Thrones is made in Ireland.  However, I think they knew exactly what they were doing, got to cocky and started bragging and are now paying the price!

I love how they say that someone pointed out that the head looked like George Bush as if they didn’t know.