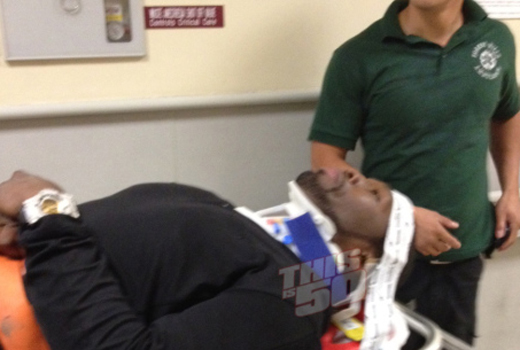 50 Cent and Driver Bruce Miller Released From Hospital After Bullet Proof SUV Gets Rammed by a Mack Truck!

If you haven’t heard by now, 50 Cent was taken to the hospital today.  Photos have surfaced as the rapper/ Entrepreneur was taking away on a stretcher.

50 was traveling in his 2005 bullet proof Chevy Suburban SUV on the LIE (Long Island Expressway for you non-New Yorkers) when a Mack truck hit him from behind.  50 was taken to Queens hospital and  underwent tests to make sure that he didn’t sustain any significant injuries to his neck and back.

Fif’s  driver, Bruce Miller was also taken to the hospital.  Both are out and doing fine.

The 61 year old driver of the Mack truck simply said that traffic stopped in front of him suddenly and the load in his truck shifted forcing him to lose control and not able to stop the truck.  It was said that the crash was so violent that 50’s Suburban almost flipped. I hope he wasn’t texting!

In case you were wondering how to get at a dude who drives a bullet proof Suburban – no we know.  Just send a Mack truck.  This was an accident; imagine if someone wanted to do something on purpose.

Glad to hear that Fif is doing fine.