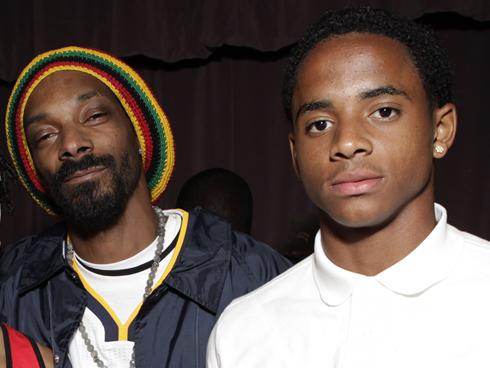 Snoop Dogg’s son will be following in the footsteps of Diddy’s if he chooses to.  He has also received an athletic scholarship to play foot ball at the UCLA.  Cordell Broadus plays both wide receiver and defensive back for Diamond Bar High School.  The 6’2”, 185 lbs. sophomore still has 2 years of high school left.  He transferred from Long Beach Polytechnic and says that Diamond Bar High feels more like home.

In an interview with ESPN Broadus says,

“The move was difficult when it first happened, meeting new friends and a new team,”

It’s been good ever since. The competition level at Long Beach Poly is a whole lot different than it is down here, but I’ve learned that it’s all on me and how hard I work.”

UCLA coach Jim Mora is getting accused for trying to pull a publicity stunt but he swears that he had no idea that this was Snoop Dogg’s son.

Just a few weeks ago UCLA received a lot of complaints about offering Justin Combs, Son of Sean Comb’s son a full scholarship.  This immediately had the internet abuzz with people shouting how unjust and unfair it was to give out scholarships to these privileged children, where there are people who earn less that can’t afford to send their child to college at all.

UCLA athletic director Dan Guerrero, has insisted that these scholarships are purely merit-based.

“[They] have nothing to do with one’s financial ability and they’ll continue to be that way in the future,”

Translation: UCLA doesn’t care about anything but recruiting good players for their football team. That’s exactly how it should be.  If one of the players father happens to be worth a few hundred million, it just means that donations will be forthcoming.  Sounds like a win win to me.
[more…]For contests, gossip, exclusive coupon codes, and giveaways subscribe to our newsletter