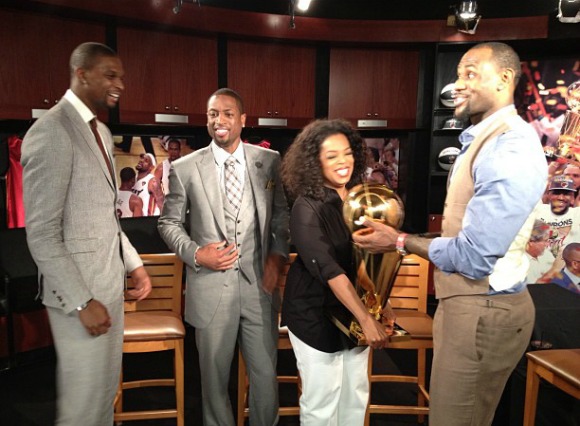 Oprah – Jumping the Shark to Save OWN. Miami Heat the Latest Newsmakers to Get Interviewed.

When I say jumping the shark, I’m not sure if that is entirely fair.  But it’s no fluke that Oprah has gone from interviewing living legends such as Sean Penn, Steven Tyler & Joel Osteen to 50 Cent, Carrie Underwood, Kim Kardashian and now the Miami Heat.

A LITTLE MORE ON THE HEAT…

LeBron James, Dwayne Wade and Chris Bosh agreed to be on Oprah’s next chapter and in typical “Next Chapter” fashion, Oprah came to them, meeting them at the American Airline’s Arena.  After the parade on Monday Oprah started being the annoying mom figure and blowing up her twitter with pictures of in the process of the interview, her holding up the NBA Finals trophy as well as a photo of herself with the Big Three.  She then tweeted,

“Hangin with the guys! – Wore my highest heels and still felt short.”

IS THE STRATEGY WORKING

Yes, Oprah’s strategy is working indeed.  Everyone just wanted and needed, more Oprah.  Mix that with some guests that are actually making daily headlines and you can’t lose.  The 2nd part of the 2 Part Kardashian interview set OWN’s record for the 3rd highest rated broadcast in OWN’s history bringing in 1.2 million viewers. Joel Osteen brought in 1.6 million viewers and Whitney Houston’s daughter brought in 3.5 million.

A lot of the changes that Oprah has put in place, including giving Rosie the boot appears to be working and working well.  The network just had its second quarter in a row where it’s experienced double digit growth.  Primetime viewership has increased 10% and daily viewers are up 31% .  Oprah just might be able to pull this thing off.