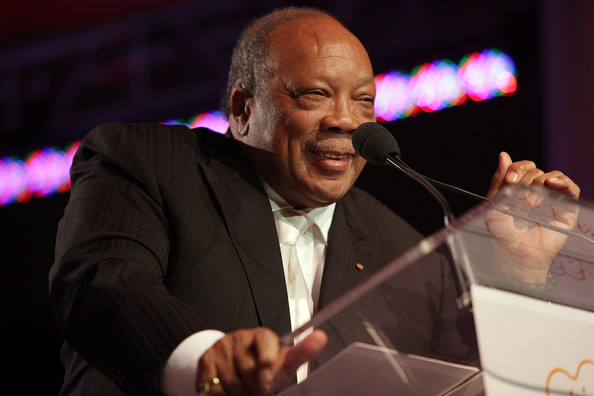 Spotify launched its new app that features curated playlists this week as well as announcing its new deal with Yahoo.  In rolling out their app they brought in legendary music producer Quincy Jones.  Jones was among the few who used the Spotify curating app to curate a play list of his own.

When a question came from the audience regarding advice on learning your craft, Jones responded,

He later cleaned up the criticism with

“P. Diddy has a doctorate in marketing…. He’s got clothes companies and Ciroc vodka.”

Spotfy has splashed on the scene with their facebook integration and now boasts over 10 million active users.  The new playlists is will help users navigate the 16 million song data base that Spotify has secured licensing for.

IS JONES QUALIFIED TO TAKE SHOTS AT DIDDY?

If anyone is qualified to take shots at Puff it would be Quincy Jones.  Although Diddy has a host of rap hits under his belt, Quincy Jones probably has 10 times as many with a resume that spans 5 decades.  He’s  worked with all the legends including Michael Jackson, Ray Charles, Dizzy Gillespie,  Aaliyah, Frank Sinatra and the list goes on and on.  He has 79 Grammy Nominations and 27 Grammy wins, which include a Grammy Legend Award.  It’s safe to say that when it comes to music, he knows his stuff.

However in the marketing department Puff might have him beat.  His estimated net worth is $500 million. For all his work, royalties and efforts QJ comes in at a measly $310 million   Is somebody jealous???

Diddy has made no response to Jone’s remark.  I think there is a level of respect there and Jone’s probably was given a pass.