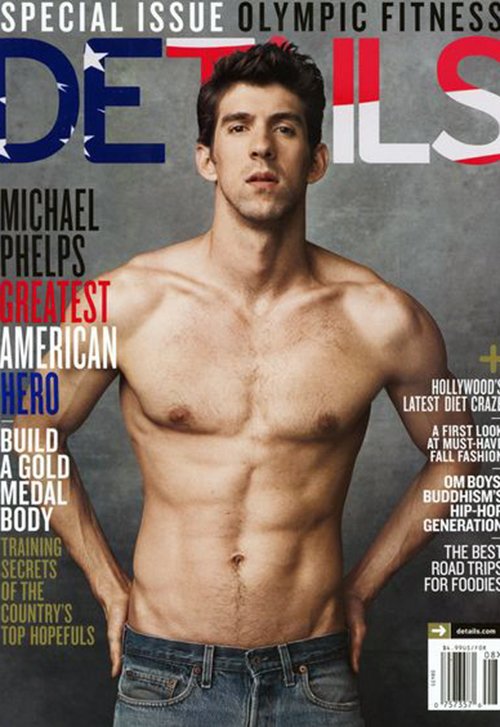 In a recent interview with Details Magazine, one in which Phelps graces the cover, the mega-Olympian talks about his training, caloric intake and what his real motivation is in London.

During the interview Phelps revealed that his not counting calories works when he’s training, but during the off season….not so much.

“I don’t count calories. Whether it’s Sour Patch Kids or Reese’s or a bag of chips, if I feel like eating it, I’m going to eat it,”

Back in 2008 Phelps told ESPN that he ate 8000- 10,000 calories a day, an amount in which experts said was highly unlikely but when Bob Costas revealed a typical Mike Phelpian type breakfast, I thought 10,000 might be a low estimate.

Without really knowing the portions experts estimate that breakfast as a 3000 calorie meal.  As you can see, 10,000 calories doesn’t seem that far fetched.  But what if you weren’t training?

I’M JUST NOT FEELING IT!

At age 27 and following an Olympic regimen calories are no problem for the 14 Gold Medalist, but after taking time off his record breaking performance at Beijing, Phelps noticed a change in his physique,

“It was weird going from the highest of the high, the biggest point of your life — winning eight gold medals — and then saying, ‘All right, where do I go from here?’ I wasn’t motivated. I did nothing, literally nothing, for a long time, I gained 25 pounds. A friend of mine and I were playing football on the beach in Miami, and somebody got a picture of us and put it all over the place. And he’s like, ‘Bro, you gotta start working out, man. You are fat.’ So I started going through the motions again. I would go back for a week or two and then stop. I’d show up for dry-land practice and then just sneak out the back door so nobody saw me.” Here are the pics, as you can see he is still in phenomenal shape for you or I, but there are no abs – and for the greatest Olympic champ in history – that’s like you or I not being able to see our feet.

Phelps said that Rocky II was what it took to put some pep in his step,

“I was watching Rocky II the other day — the one where he’s fighting Apollo for the second time and he’s just going through the motions, It reminded me of how I was.”

WHAT ABOUT GETTING BLUNTED MIKE?

Remember that? Yeah that wasn’t cool at all.  Back in January 2009, Phelps got caught smoking weed via a picture of him, face first in a bong.  Kellogg decided to cut him from their endorsement roster and the USA Swimming association suspended him for 3 months.

Phelps said he learned his lesson.

“It was a learning experience, I’m the kind of person who has to go through the learning experiences myself. Somebody could tell me, ‘If you eat this much you’ll be fat,’ and I’d be like, ‘Yeah, okay, let me try it.’ Growing up, my mom taught us to make our own decisions, but also that you have to pay for the consequences of those decisions. I’m thankful for that. I’ll be the first to say I’ve made thousands of mistakes, but I’ve never made the same mistake twice.”

If you are wondering if Mike’s mind is right, don’t think twice.  His next statement basically let me know his mind is on the task at hand.  The biggest motivator for success is not having regrets and he is going through that realization right now.  He realizes that the 8 Gold Medals wasn’t him at his pique.  Only he knows that, and only he can do something about it.  He says that he eventually,

“realized that I probably hadn’t reached my full potential, As I come to closure on my career, am I going to look back in 20 years and say, ‘What if?’ That’s something I don’t want. This is it. I’ve always said I wouldn’t swim past 30. I don’t want to be that guy who’s hanging on, but I want to reach my max potential. I don’t care how much pain I have to go through or the sacrifices I have to make. I’ll get it.”

This should be some Olympics!