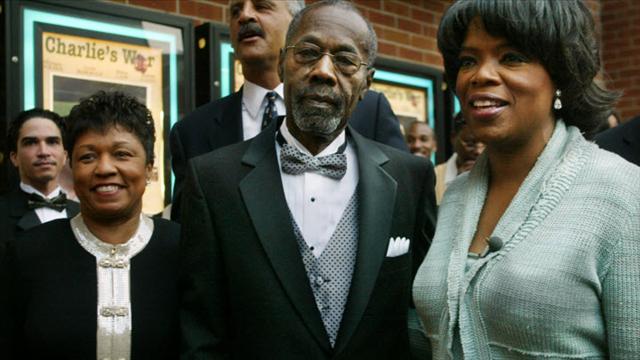 Was Oprah Saving Her Dad’s Barber Shop a Strategic Move to Help Him in a Nasty Divorce?

Oprah’s Dad could be a guest on her show!

Last week the big “O” made the news because she purchased her Dad’s barber shop before it went into foreclosure, after further snooping, it looks like that could have been a strategic move, allowing the shop to stay in the family while her father battled what is shaping out to be a nasty divorce.

The 79 year old Vernon Winfrey celebrated his 12 year wedding anniversary by filing for divorce just 5 days later.  This is his third marriage and mostly likely his 3rd divorce.  In his claim he cited the reason for divorcing Oprah’s stepmoms was the standard “irreconcilable differences” along with inappropriate “marital conduct”.

Barbara Winfrey files a counter revealing that Oprah’s dad has been up to some un-Oprah like behavior.  In her court documentation, Barbara Winfrey states that Vernon not only had many extra marital affairs, but one time he became so angry he chased her with a gun!

Oprah’s dad and her stepmom live in a $1.5 million dollar house that is owned by Oprah, and now last week after spending $475,000 on his barber shop, she owns that too which means that technically Vernon owns nothing.  Now in the divorce settlement neither the home nor the Barbara shop are negotiable. Barbara Winfrey said she is on to the game,

Barbara also told the local media that Oprah was controlling her father.

‘Vernon Winfrey has been a fixture in the community for decades and will continue to manage the business on a day-to-day basis.’

In a telephone call to a local TV station Vernon said:

‘My wife and I, we have not been getting along well, and I did not want to endow myself to another drawn-out, struggling debt.’

Although Vernon’s Barber shop has been in its new East Nashville location a little over a year, he ran a shop there for 50 years and has no plan on retiring no matter what Oprah says, or how much money she has.  Regarding retirement Vernon says,

‘When I’m gone, I’m glad I’ll be able to say I left the neighborhood looking nice,’

It looks like Oprah and her stacks have his back.  With a daughter who has a net worth of $2.7 billion, you can have 99 problems but trust me, a b**tch ain’t one.