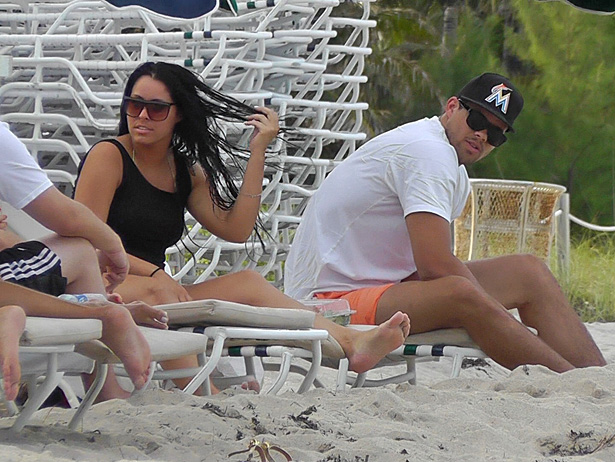 Kris Humphries Jump-Off Myla Sinanag Is Not Preggers. She sets the Record Straight HERSELF!

Did you hear that?  That huge gust of wind?  That was Kris Humpty Humphries letting out a huge sigh of relief.  His jump off is NOT PREGGERS!

Although rumors had it, including yours truly that Myla Sinanag was three months pregnant with their baby, she said today that this is not true.

During a twitter interview, the 5’7, Albanian jump-off, told the website, AllWestEverything that she was not pregnant. Here are her exact words,

“I don’t know who there ‘sources’ are but since this all happen I still have NOT ever spoken yet everyday tabloids say I can’t keep my mouth shut. Its such BS. 1. I’m NOT pregnant 2. I’m not signing no NDA’s or getting any $ or going against Kris in his divorce.I dropped my law suit because after things got out of hand me and kris realized our friendship was bigger than the BS I never cared. About $ he’s a GOOD guy and so many people don’t know that because he’s so negatively portrayed but I knw who he is and that’s why I trust him and dropped everything with no settlement. When you love someone you don’t want to hurt them so all these bs ‘sources’Have ppl thinking I’m saying all this stuff I’m not its frustrating. Ppl will never understand my reasons for still caring for Him after everything he did but I love him and that over rides any $ or fame.”

Its crazy! Smh I’m portrayed as a crazy gold digger booty call and he’s a bad guy. He’s not even after what he did I know his heart is good. But every1 makes mistakes I think it takes a strong person to forgive something I was put through and someone who obviously really loves him. I didn’t drop suit to ‘Get him back’ I did it because he apologized n that’s all I care about. I don’t knw what future holds.

I feel like this man goes through so much negativity because of me in press but I’m the one the cares genuinely for him. Its hard And ppl don’t even know that I dropped everything because I care not being some goldigger. Sucks

I Feel guilty letting fake stories run that affect kris.He already is so stressed I should not be 1 as well.if it was just me I wouldn’t care.

1 thing forgot to say preggo rummor started off a general tweet 1 made on 4th of july sayin ‘ONE day can’t wait to have a lil boy’ not. That I was preg… Or close too.  Its ridiculous they thought I’m subliminal saying I’m preg. LOL

Myla then posted a picture of herself with her stomach out, and tweeted, There are still no answers regarding the baby bump pictures that were taken yesterday.  Maybe she just ate a bowl of pasta and was experiencing a carb-bloat situation.