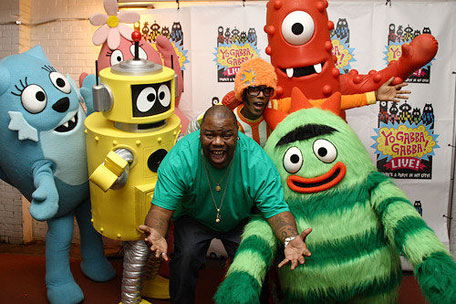 Biz Markie is Killing it With Yo Gabba Gabba.

TMZ found Biz on the street and released a clip that got Biz’s name back in the news and all the blogs.

WHAT HAS BIZ BEEN DOING?

Biz was DJ’ing for Chris Rock on his “No Apologies” Tour.  Then he started doing Radio Shack Commercials.

While doing all that he’s also been killin’ it with “Yo Gabba Gabba”.  During an interview with wvgazette.com, Biz explained that he got out of hip hop because things got dark,

It got dark. I got out of hip-hop because it wasn’t the same as when I started. I’m not knocking the rest of them [rappers], but I didn’t like where hip-hop was going, so I moved on to other things.”

In his journey away from Hip Hop he was snatched up by the kids show “Yo Gabba Gabba” and has never looked back.

The theme of the show involves a DJ named Lance Rock.  He uses his radio to bring alien like creatures to life.  These creatures teach kids valuable lessons like eating well and brushing your teeth.  The show has over 50 episodes produced and is in it’s fourth season.  Biz actually knew the creators of the show and they asked him to come down for an audition for a dance segment.  Biz’s back was out and he couldn’t dance so he did what he does best, “He made the music, with his Mouth” and the rest was history.  As Biz tells the story to spinner back in 2010

I knew the creators,  they’d told me to come in [to audition for a segment called] ‘Dance of the Day,’ but my back was hurting. So I made up ‘Biz’s Beat of the Day’ right there.”

Biz’s Beat of the Day is a regular segment, so much so that Biz has been on tour with the Gabba Gabba crew since 2010.  In pure Wiggles fashion, Yo Gabba Gabba does a live tour with DJ Lance, Muno, Foofa, Brobee, Toodee, Plex and Biz.  Due to the many hip hop connections of its creators there are always special guests during the shows, like Talib Kweli, Sarah Silverman or the Roots.

At age 46 Biz knew that his time for “rapping” had expired and was smart enough to transition when he saw the opportunity,

Hip-hop isn’t what it used to be, I guess we got older. It evolved into something else. Some of the veteran rappers can’t be new-school rappers. It’s like in baseball — old players retire and coach, or become batting instructors.”

I just wish some other rappers could heed that advice. #toooldtoberapping