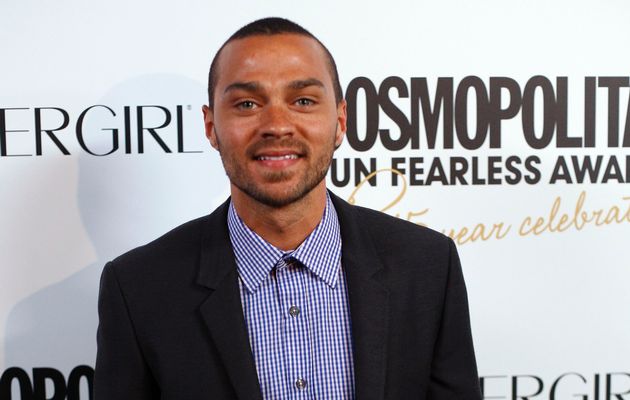 For all you ladies that thought he was gay, think again.  Jesse Williams is 100% heterosexual, but now get ready for your hearts to be broken….he’s now a married man.

The lucky lady’s name is Aryn Drake Lee.  Instantly her name is a buzz all over the internet.  Women want to know, “who is this chick and how hot is she?”

We are talking about Jesse Williams.  This is the guy who’s shirtless photo is responsible for getting me 100,000 hits.  The search term “Jesse Williams shirtless” was one of the reasons this blog exists today….and the verdict is…she’s not so hot.  Not at all. In fact she’s average. You dress her up, and she looks pretty good, on a bad day she looks bad.  This makes me love Williams even more.  He’s a regular guy living a regular life. As you can see, she is just average, and that’s perfectly Ok.  In the pic above, she looks cute and she has a beautiful smile and most importantly the two look happy.

The two met before Jesse was famous.  The son of two teachers, Jesse too was a high school and middle school teacher when he first met Aryn. Williams says she’s been there for him through it all,

He describes her as confident and independence,

“She is her own person, Being intelligent and self-made is a big deal for me.”

On the Brown Harris Lee realtors website Aryn is listed as one of their most successful brokers, so she definitely has her own money.

The couple wed on Saturday in Los Angeles. Let’s see if Williams can continue to buck the Hollywood trend and stay married now that he’s a big deal.  He’s made it this far and that’s admirable but you know what they say,

“Marriage is an institution in which a man loses his Bachelor’s Degree and the woman gets her Masters”.

Good Luck to the Newlyweds.