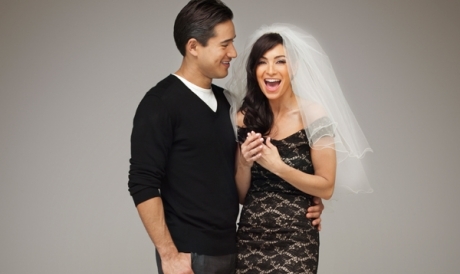 Mario Lopez and Courtney Mazza’s Wedding Will Air On TLC. Will they show their Daughters Meltdown?

Mario Lopez and Courtney Mazza recently married, and the affair is set to air on TLC. If they get behind the scenes the way we want them to, then we should see the antics of the couples two year old daughter Gia.

For me there is nothing like seeing rich celebrities keeping it real, and there is nothing more realer then a two year old girl acting up. Courtney Mazza explains that their daughter’s behavior started as early as the dress fitting. She says the two year old was reluctant to try her dress on. Mazza tells Us Weekly,

“Every time she had to try that dress on at the salon, she screamed because she just didn’t want to get dressed. I kept telling the ladies there, ‘Don’t worry, the day of the wedding , she’ll know what to do!’ “

On the wedding day the tantrum continued until Gia saw her mom in her own wedding dress and immediately wanted to be a part of the wedding day action. Mazza, had way more patience then my mom would have had, she basically let Gia put on her little dress when she was ready. Courtney explains,

That wasn’t the end of the drama. When it was time to walk the aisle, Gia was ready to do her flower girl duties until the purse she was carrying which held the flowers spilled over. The toddler just stood there looking upset, until other kids came over and helped her down the aisle to her grandmother.

Mazza was confident that Gia was going to make it down the aisle. She says,

“She walked that whole way earlier … we practiced it,”

Despite practicing things 100 times, with a two year old anything can happen and typically does. Mazza said that she didn’t even see her daughter drop the purse.

The show on TLC is called “Mario & Courtney’s Wedding Fiesta” and will be shown December 8th at 8 PM. Let’s hope they leave in all the good parts.