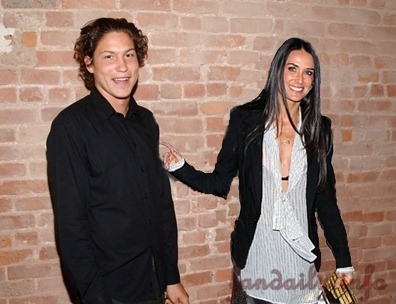 Demi Moore is Dumped by Her Boy Toy and Continues to Party!

Demi Moore and her new young squeeze are a wrap!  The short lived, highly publicized romance between Demi Moore and art dealer Vito Schnabel is over.

Apparently she was cramping his style and he cut her loose.  The 26 year old Vito did not appreciate her attendance at an art fair in Miami and decided to put an end to things.

Moore and Vito met at Naomi Campbell’s over the top birthday for her boo, Vladimir Doronin.  The 50 year old Demi and Vito have been hot and heavy…..until now.

The NY Post is reporting that the break up was initiated by Vito, who didn’t want his reputation as a hard working businessman tarnished,

Vito has worked very hard to be taken seriously in the art business, and doesn’t want to be seen as somebody who dates celebrities. He hated having photographers follow him around after word got out about him and Demi.

Unlike the break up with Kuctcher, Demi was not fazed by Vito and she continued to enjoy herself partying with Lenny Kravitz and Stacy Kiebler.  She was caught on video having a good time.  Like I say, the only thing better than a cougar, is a rich cougar.
[more…]