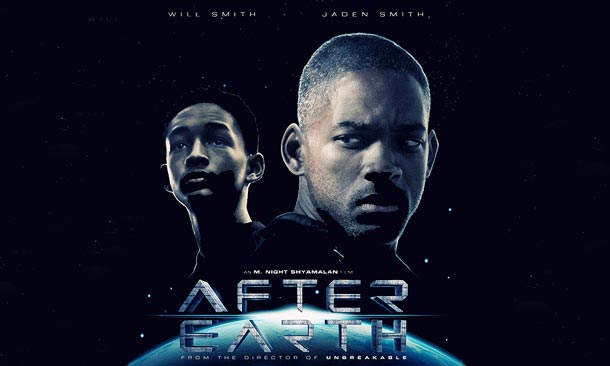 Watch New Trailer for Will Smith and Son’s new Movie, After Earth.

The father and son acting duo is at it again. Will Smith and his son Jaden will make their return together on the big screen in After Earth. After Earth will be the first time that the two have starred together since “The Pursuit of Happyness” back in 2006.

Ater Earth is about a father and son who land on earth 1000 years after cataclysmic events have forced man kind to evacuate. Will Smith takes on the role as Legendary General Cypher Riage who is critically injured in the cockpit of their air craft when it crash lands to on the planet; while Jaden Smith plays Kitai, Cypher’s 13 year old son. Kitai must find their rescue beacon to save the lives of him and his father. This is his chance to be a soldier just like Dad.

Apparently everything on earth has been bred and adapted to kill humans which makes Kitai’s job next to impossible. The movie looks good, Real Good!!

The M. Night Shyamalan directed film will hit theaters on June 7th, 2013. M. Night has had some stumbles recently, maybe this can help get his Mo Jo back!!