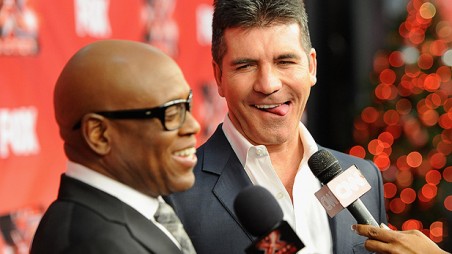 Rich People Problems: Simon Cowell bet L.A. $20,000 That he Would Win This Season of The X Factor.

Simon Cowell apparently bet L.A. Reid $20,000  that he would win this season of the X Factor.  The bet was made in the beginning of the season and as we now know, L.A. Reid, in what was to be his last season, was victorious.

Initially L.A. was not happy being the mentor for the over 25 year old performers, but L.A.’s act, country singer Tate Stevens took home the $5 Million dollar recording contract.

Cowell, not a sore loser and extremely rich plans on paying up as agreed.  This friendly bet and friendly rivalry goes further to discredit claims that L.A. Reid is leaving the show due to a troubled relationship with Cowell.

Cowell says that Reid is already regretting his decision to leave the show but the two plan on working together on future projects.

I came into this knowing that it wasn’t gonna become my life.

“Simon and I are really good friends, and he knew at some point I needed to get back to work.”