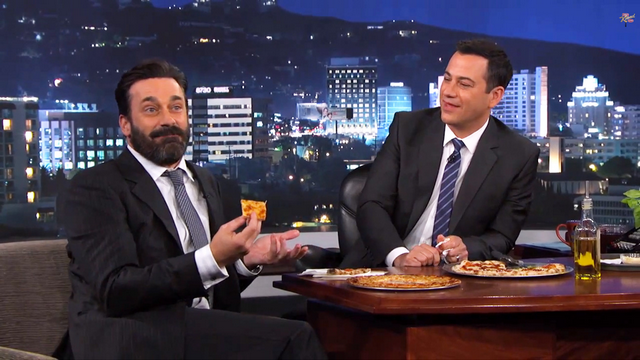 Jon Hamm Does Not Have Cancer

You’ve probably heard all about Jon Hamm’s upcoming surgery to remove a polyp from his throat. His rep confirmed the news a few days ago, but the crazy rumors surrounding the surgery have been swirling around for awhile.

Some sites have suggested that Hamm secretly has cancer and that he’s coughing up blood 24/7. However, that is obviously not the case.

Hamm made a special appearance on Jimmy Kimmel Live a couple of nights ago to clear everything up. He explained to the late night audience that the surgery is a “very routine procedure.”

“I’ve got a polyp on my vocal chord. It sounds worse than it is, although it doesn’t sound as bad as how the National Enquirer reported it, which was that I was coughing up blood and probably have cancer.”

The 42-year-old actor then revealed that his family heard about the rumors and called him to make sure he was alright,

“My sister called me and was like, ‘Um, is there something you want to tell us?’ And I was like, ‘No, why?’ she replied, ‘We just read that you’re probably going to die.’ I was like, ‘What? When? Who have you been talking to?’”

Ah, it’s nice to see the internet is still trying to create fake death rumors. It won’t be long ‘til we hear a report claiming Regis Philbin died in a tragic surfing accident.

Yeah, I realize that doesn’t make much sense. Why the hell would Regis be surfing? He wouldn’t be. The truth is I just wanted you all to picture his wrinkly body in a tight wetsuit.