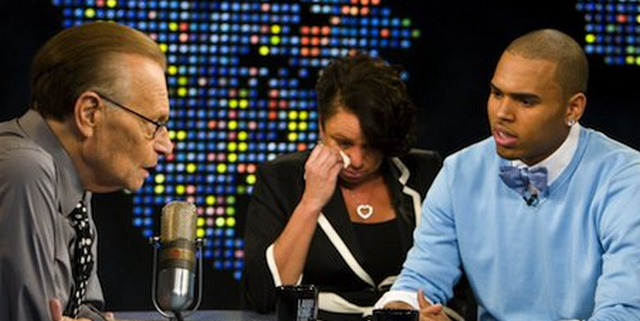 Chris Brown’s Mom Says His Dirtbag Friends Are To Blame

As you have probably heard by now, the reason Chris Brown was released from rehab early was because he got kicked out of the place!

During a family meeting at the rehab center, Brown’s mother told him that he should stay in the treatment center for an extended amount of time. This was not something the singer wanted to hear, so he turned into the Hulk and smashed her car window with a rock. He was kicked out of the place after the display of rage.

Well, now his mom is speaking out and she blames his recent behavior on his crappy friends. According to sources who talked with TMZ, Brown’s mother thinks that his friends are the ones who got him hooked on drugs and hooked on the “thug” life.

She says that his friends only hang around him for his money and that they use him all the time. She just doesn’t understand why he doesn’t see it. Apparently, Chris smokes a lot of weed now, to the point where he was stoned most of the time.

This is why she said what she said in the rehab center. She believes her son needs help, and it’s obvious he does by the way he reacted to the news.

It’s funny how the families of these broken celebrities all seem to blame their friends. Justin Bieber’s friends suck, Brown’s friends suck. At some point, they just need to admit their baby boy is a piece of sh-t.

Your friends can make you do silly things, but no friend is going to brainwash me into throwing a rock through my mother’s car window. She’d probably grab that rock and throw it right back at my stupid ass.