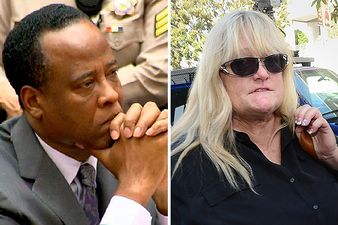 The Fight Gets Weirder- Debbie Rowe Lashes out at Conrad Murray

Conrad Murray, the doctor convicted of killing Michael Jackson through extreme negligence, has just given his first interview. In it, he discusses his uber close relationship with Jackson, rife with deep love, friendship…and penis holding.

Then Murray made the mistake of dragging Michael Jackson’s ex, Debbie Rowe, into the fray. Murray mentioned how he and Jackson used to joke about how sexually unattractive Rowe was. When TMZ called Rowe for a comment, she didn’t hold anything back.

‘I wouldn’t shoot him but I’d buy the bullet … a hollow-point.’

She then went on to explain the benefits of shooting Rowe with a hollow-point, over a standard bullet and tossed out a few, over-used, older than time jokes at Murray’s expense. [more…]

‘If I had a dog as ugly as him [Murray] I’d shave its ass, make it walk backwards and put a wig on it,’ Debbie continues. ‘It takes two to f*** and there’s not enough alcohol in the world.’

Debbie Rowe is Jackson’s ex-wife and mother of two of his children Prince,16, and 15-year-old Paris. Murray was Jackson’s long-time personal physician. Which kind of makes you wonder, where was Jackson finding these people? Craigslist?