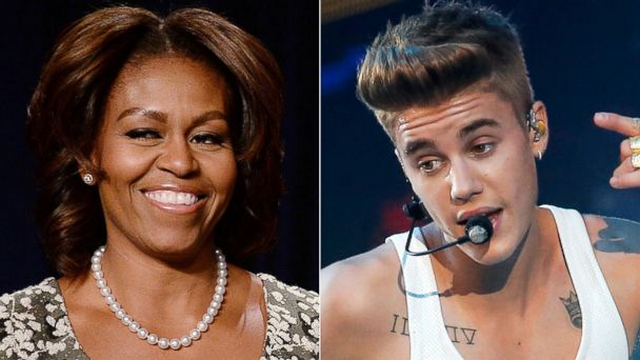 Michelle Obama Has Some Advice For Justin Bieber’s Mother

What question would you ask first lady Michelle Obama if you had the chance to interview her? Would you ask her about ObamaCare? About the drama surrounding the Olympics in Sochi? What about all the work she does to help fight childhood obesity? Of course not! That would just be silly. Everyone knows you must ask Michelle Obama about the Bieber crisis. That’s right, Michelle Obama talked with Univision last week and she was asked what she would do with Justin Bieber.

That’s good advice and all, but does anyone really care? Personally, I don’t give a f–k what the President or his wife thinks about Justin Bieber. I mean, is this what we will be hearing at the upcoming debates in 2016?

Wolf Blitzer: Hillary Clinton…you have 15 seconds to talk about the premature cancellation of Freaks and Geeks.

Clinton: Well, Wolf. First of all, I’d just like to say how happy I am to be here. It’s such an honor. The people of America are so kind and welcoming.

Blitzer: But what about Freaks and Geeks?

Clinton: I believe I answered that question, Wolf.

Blitzer: Uh, I don’t believe you did.

Clinton: Sure I did.