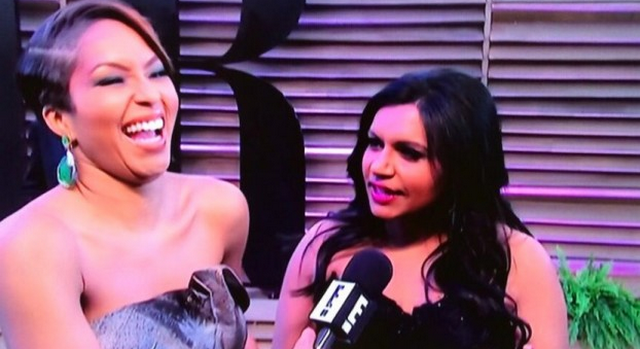 Mindy Kaling is the creator and star of the hit comedy ” The Mindy Project” on FOX. The former “Office” star has proved to Hollywood that she is a force to be reckoned with.

But despite all her success and talent, the 34-year-old actress/writer/director still has to answer ridiculous questions. Ridiculous questions about the color of her skin, her dress size and what color guys she prefers to hook up with.

E! News Correspondent Alicia Quarles had the chance to interview Mindy before the Oscars Sunday night. During the interview, Quarles asked Kaling what her “type” was.

“Who’s my type? Good looking” Kaling replied. But that answer didn’t satisfy the reporter. It’s impossible for someone to actually be attracted to every skin color! So, Quarles followed up her first silly question with another, even sillier question.

“Okay, so any color?” She asked, which clearly made Kaling a bit uncomfortable. However, she managed to keep her cool and laugh it off, “Yeah” she replied. Quarles then instructed Kaling to “kiss a black man on the show.”

We’re not saying the question was racist or anything, but we are saying it was inappropriate. This reporter was talking to one talented woman, and she decides to ask her what color guys she likes? Really? I have would been more interested to actually hear more about her show, and hear about how much of a struggle it is to write, direct and star in it.

Sadly, because of her gender and her skin color, Kaling has to answer stupid questions like this all the time. She tries her best to laugh off the questions, but she does admit the questions get tiring.

She told Rolling Stone the following…

“Sometimes I get jealous of white male showrunners when 90 percent of their questions are about characters, story structure, creative inspiration, or, hell, even the business of getting a show on the air. Because as a result the interview of me reads like I’m interested only in talking about my outward appearance and the politics of being a minority and how I fit into Hollywood, blah blah blah. I want to shout, “Those were the only questions they asked!”