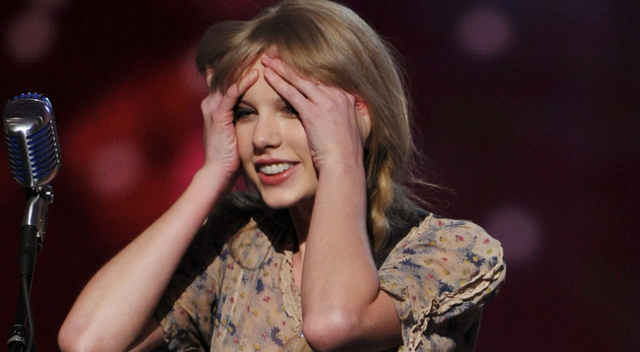 For once, it looks like Taylor Swift is the sane one in a relationship. A man by the name of Timothy Sweet is madly in love with the 24-year-old singer.

Sweet has sent out a number of threatening emails, social media posts and even letters to the singer. TMZ has managed to obtain the legal docs Swift filed in order to get a restraining order against Sweet, and some of his threats are alarming. “If anyone in Taylor Swift’s family gets killed, it’s not my fault.” He allegedly wrote. “Dearest Taylor, I’ll kill any man who gets in the way of our marriage. Message to John Kerry, Secretary of State. Message from YOUR Presidential Candidate.”

As you can clearly see, the dude is f–king crazy. He doesn’t need to be made fun of. He needs help, and lots of it. We’re not sure if he’s going to receive any help, but we do know a judge ordered Sweet to stay 100 yards away from Swift and three members of her family.

The threats and stalking have been going on now for over four years. We can only hope this dude is all talk. Maybe he’s the reason all of Taylor Swift’s relationships end badly. He’s probably sending them all threatening messages, “Stay with her and you’ll die!”

And they get all freaked out, so they decide to breakup with poor Swift by texting her. IT ALL MAKES SENSE NOW! TAYLOR SWIFT ISN’T CRAZY! IT’S HER STALKER!