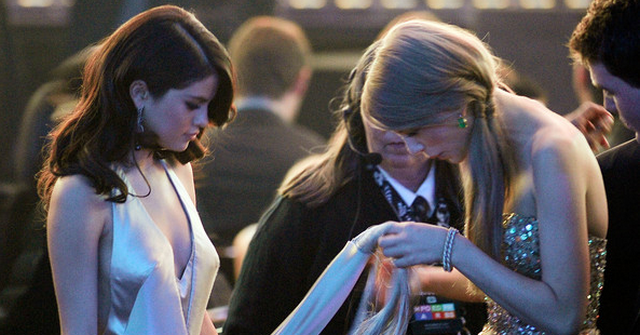 We all know Taylor Swift hates Justin Bieber. She has made that quite clear in the past. Remember the GIF down below from the Billboard Music Awards?

Yeah, we were disgusted just as much as you were, Taylor. The 24-year-old singer has told Selena in the past that she does not approve of her relationship with the Biebs. And she was reportedly delighted when they broke up.

But as we all now know, Justin Bieber and Selena Gomez are back together again, and Taylor Swift is not happy. Sources tell Us Weekly that Swift has distanced herself from the 21-year-old singer. She’s not throwing away their friendship completely, but she is extremely disappointed.

Swift is also pissed at Selena for using Ed Sheeran as a little pawn in her sick chess game with Bieber. She believes Gomez used her brief relationship with Sheeran to make Justin Bieber jealous.

It doesn’t look like Gomez cares about this best friend drama, though. She’s too busy taking care of the $10,000 worth of flowers Bieber sent her.