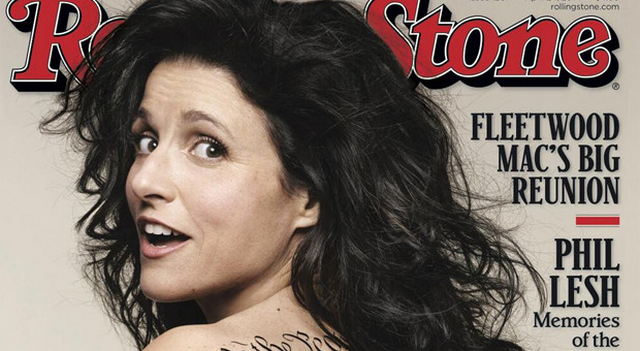 Julia Louis-Dreyfus Is Butt-Naked For The Cover Of Rolling Stone! (PHOTOS)

Julia Louis-Dreyfus is the first lady of comedy, and Rolling Stone is honoring the 53-year-old actress in the April 24 issue of their magazine.

The four-time Emmy winner stripped down for the amazing cover photo. The only thing on her body is the text of the U.S. Constitution. Julia tweeted out the cover photo the other day with a caption that read, “In my defense, ‘I was in a drunken stupor’ #crackexcuse.”

The star of HBO’s hit series Veep, which just kicked off its third season last weekend, told the magazine that sexism is alive in Hollywood, but she refuses to let it bother her.

“There is sexism – I’m not denying its existence. But I’m saying that I will deny its effort against me. I just pay it no nevermind and say, ‘Get out of my way.'”

She also talked about having dinner with Joe Biden,

“He loves to tell stories, and I’m a good listener. I loved that dinner. There was no cynicism, just a very earnest jubilation about being there.”

Just replace the white guy with Barack Obama and the dog with Joe Biden.