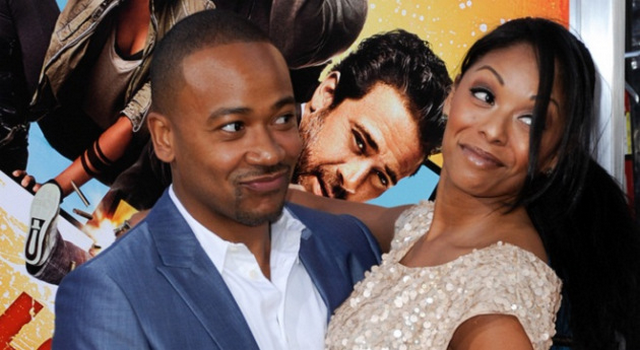 This Columbus Short dude is crazy. His wife has now hit him with divorce papers and a restraining order after he threatened to kill her in a murder-suicide.

Earlier this month Short allegedly threatened to kill his wife, Tuere Tanee McCall, with a knife. The incident took place on April 7, and shortly after it happened McCall, McCalled police to get a restraining order. According to the documents, Short held a knife to his wife’s throat during the incident.

He then threatened murder-suicide, and asked her if she was having an affair on him. He also poured wine on her before pinning her to a couch.

Thankfully she was able to get away in her car, but one of her tires were slashed, “He placed the knife close to my neck and threatened to kill me and then kill himself.”

McCall was successful in her restraining order attempt. Short was forced to move out of the house, and police made sure he did just that earlier this week. She also filed for divorce. She is seeking sole physical and legal custody of their 2-year-old daughter.

As you all know, this isn’t the first time Short has been violent. Just last month he knocked a dude out in a bar fight. He also broke some man’s jaw during a basketball pick-up game in 2010, and he’s even been accused of domestic violence before this latest incident.

Sounds like he needs some help. It also sounds like alcohol might be a problem for him, but that’s just speculation. Please don’t come to my house and murder me, Mr. Short.