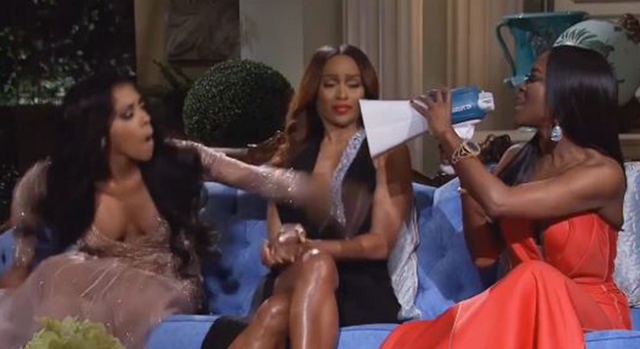 We all assumed Porsha Williams attacked Kenya Moore simply because she was sick of the trash talking. However, a new report from RadarOnline claims wine and prescription drugs were to blame.

According to the report, Porsha was chugging down wine backstage. The report also claims she was mixing the wine with antidepressants, and painkillers from her recent breast augmentation. Obviously, those three didn’t mix well together, and Porsha Williams ended up losing her mind on stage.

One insider claims Porsha started drinking because she needed some “liquid courage” to help her fight Kenya Moore.

“Porsha was drunk…  there were two bottles of wine in her dressing room. She came to fight Kenya and needed some liquid courage!”

Cast member NeNe Leakes claims everyone was sober during the reunion special, but multiple sources say that is just not true. One source claims Porsha is in a bad place right now.

“She is very unstable. She’s been taking medications and mixing it with alcohol. Bravo knows that she is now nothing but a liability. Her attack on Kenya failed, and she lost her mind. It’s all very sad.”

We can’t help but wonder if Kenya Moore was the main “source” for this report? It sounds like something she might come up with. It’s really difficult to pick a side in this battle. They all seem like such miserable people.