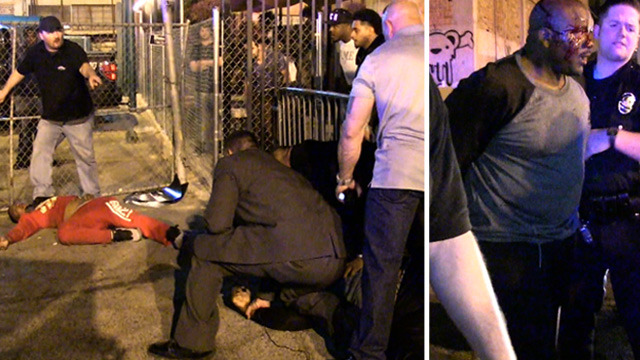 Game And T.I. Involved In Brief Standoff With Police After Scary Fight Outside Club (VIDEO)

The Game and T.I. were involved in a pretty intense standoff with LAPD cops outside an L.A. club early this morning. It all started after a group of guys, who were mutual acquaintances of both rappers, were denied access to the club.

The guys got upset and begin to argue with the security at the club. One member of the group took a swing at one of the security guards, and that’s when a brutal fight broke out.

You can watch video of the initial fight down below…

As you can see, the fight was pretty intense. There were definitely some cheap shots being thrown around by both sides.

After things calmed down, T.I. and Game walked out of the club to find their boys on the ground with blood all over their face. They noticed all the cops surrounding the scene, and assumed they were the ones who beat up their friends.

Watch what happens next…

How sad is that? Honestly. The video doesn’t even make me angry. It just makes me feel sad. Why someone would get so angry and act so childish without even knowing what the f–k is going on is insane to me.

Why does there always have to be revenge? If you fight violence with violence, then you are just going to get more violence. It just seems like the world is such an angry place right now. I could go on and on about this, but I am sure no one wants to hear me rant.

Just love each other. Let go of all the hate.