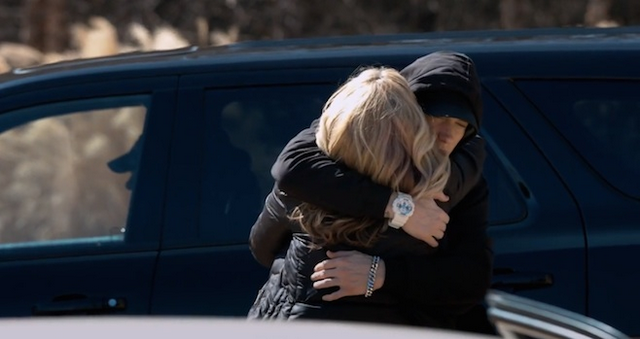 It took 41 years, but it looks like Eminem is finally ready to forgive his mother. The Grammy award-winning rapper released a touching music video to his mother (Debbie Mathers) on Mother’s Day. The 41-year-old rapper released “Headlights” yesterday, and it’s probably Eminem’s most heartfelt song to date.

The music video for the song was directed by Spike Lee and features a “first person” perspective throughout the video. The video is unique because it gives you both Debbie’s and Eminem’s perspective.

During the 4-minute song, Eminem apologizes to his mother for being so hard on her in previous songs. Who could forget the song, “Cleanin’ Out My Closet” where he says this about his mother…

“But put yourself in my position; just try to envision. Witnessing your momma popping prescription pills in the kitchen. B**ching that someone’s always going through her purse and sh*t’s missing. Going through public housing systems, victim of Munchhausen’s Syndrome. My whole life I was made to believe I was sick when I wasn’t til I grew up, now I blew up, it makes you sick to ya stomach. Doesn’t it? Wasn’t it the reason you made that CD for me Ma? So you could try to justify the way you treated me Ma? But guess what? You’re getting older now and it’s cold when you’re lonely. And Nathan’s growing up so quick he’s gonna know that you’re phony.”

But that song was released over a decade ago. It’s clear Eminem is growing up, and it looks like he’s ready to replace all that hate in his heart with love.

Check out the touching video down below…

That certainly beats the Outback Steakhouse gift card I gave my mother yesterday.