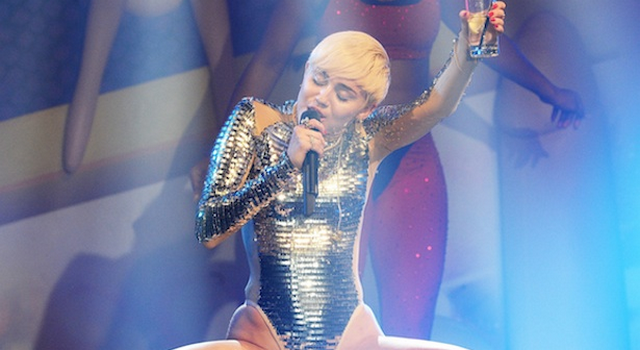 We guess Miley Cyrus is feeling better. The 21-year-old pop star is back to doing what she does best. Pissing people off. Her first offensive act came when she stimulated oral sex on an inflatable penis.

You can view a wonderful photo of this event down below…

How lovely. Anyway, that’s not even the most offensive thing she did last weekend. It was what she said during her performance at G-A-Y nightclub in London that has a lot of people demanding an apology.

Miley took a break from singing and decided to give the crowd some questionable dating advice.

“You know, everyone’s a little bit gay. It’s the truth. Everyone’s gay, all it takes is one cocktail. And if that doesn’t work, sprinkle something in their drink. That’s what I always do.”

On no she didn’t! Obviously she was just making a joke (at least we hope) but most people agree joking about rape is crossing the line. And let’s be honest here, fans of Miley Cyrus aren’t exactly known for their good behavior.

What if one idiot in the crowd actually took her advice seriously? That means someone later that night entered their friend’s backdoor without permission.