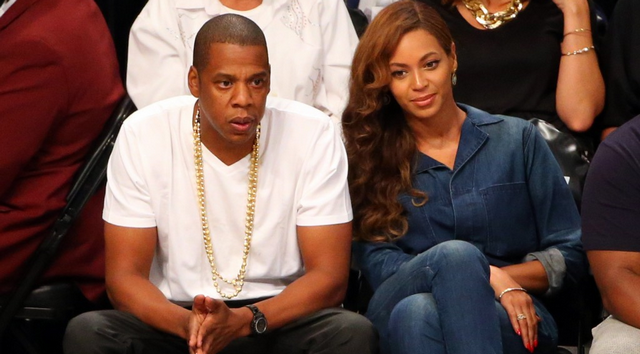 Where do you take the woman who just went “Worldstar” on you in an elevator? To a high-end New York jewelry store, of course! Jay Z and Solange were seen shopping together at a fancy jewelry store in New York yesterday.

TMZ reports the two looked around for a little bit, but never did buy anything from the store. Sources say there were no signs of a feud between the two stars, but they also note that there wasn’t a lot of talking going on between them either.

Obviously this was a staged event. They were hoping people would spot them inside the store. It was their way of making a statement without actually making a statement; however, we are not buying it! The anger Solange was showing in that elevator video didn’t look like something that would just go away in a few days.

There is some serious hate going on inside her. Why? We don’t know. It’s possible she’s just a crazy bitch. But it’s also possible Jay Z said or did something that pissed her off.

A lot of theories have been going around lately. Some people claim Jay Z was cheating on Beyonce and some people blame Solange’s alcohol problem, but what if it’s actually something less sinister?

What if Solange was trying to save Jay Z from a bee attack? That security footage wasn’t in HD. There could have been a bee inside the elevator, and we all know Jay Z can’t afford to get stung by a bee. His face already looks permanently swollen.